Skip to content
The book will be published in autumn December 2022. 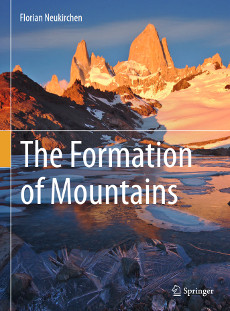 Florian Neukirchen
The Formation of Mountains

▸ Provides a straightforward introduction to orogenesis and plate tectonics
▸ Richly illustrated with photos and color graphics
▸ Ideal travel preparation for hikers, climbers and students of the geosciences and geography

Mountains as we know them were formed by a wide range of processes. This vivid introduction explains the course of orogeny (mountain formation) and the resulting structures, the cycles of plate tectonics and the evolution of landforms. It also presents surprising findings from the latest research. Popular travel destinations are described in detail – ideal when preparing for a trip – while a wealth of photos and graphics illustrate the text. Why are mountains as tall as they are? How does high-pressure rock come to the surface? Is there feedback between tectonics and the climate? How can mountains form without continental collision, far away from any plate boundaries? And how do we know all this? These and many other questions will be answered.

Florian Neukirchen is a geoscientist and non-fiction author. After completing his studies in Freiburg, he worked on alkaline rocks at the University of Tübingen. Research trips led him to Oldoinyo Lengai in Tanzania, through the High Atlas in Morocco and to the Ilimaussaq intrusion in Greenland. On his travels around the world he has visited many mountain ranges, climbed quite a few peaks or carried a backpack and camera on long-distance treks to capture the best views. He currently lives and writes in Berlin. He has published The World of Mineral Deposits (2020), as well as several books on geology in German.

Chapter 1 – The Structure of Mountains

Between Chur and Lake Walen in Switzerland, a striking line divides the mountains, in two storeys of obviously completely different rocks. The Glarus Thrust is where geologists recognised for the first time that mountain ranges like the Alps are composed of nappes that were thrust over each other in the process of orogenesis. This structure is a good vantage point for an introduction into the fundamentals of tectonics: how can rocks be deformed? The folded Jura and the Helvetic nappes in Switzerland illustrate further relationships between folds, faults and the forces at work. Further sections introduce important minerals and the structure of the Earth and provide a short overview of Earth’s history.

This introduction to rock types focuses on processes of erosion, sedimentation, and metamorphism, as well as melting of rocks and crystallisation of magmas. Landforms that are typical for the respective rock types are also presented. We explore the fossil reefs of the Dolomites and karst forms such as caves. Glaciers, rivers and landslides gnaw at the mountains and sculpt them. If we find out under which conditions metamorphic rocks have transformed, we get important information about the dynamics of mountain formation. We learn how magmas are formed and why they can have different compositions and properties.

The realisation that continents migrate over the globe led to the greatest revolution in the history of earth sciences. The question of when and why mountains are formed can be easily explained by plate tectonics. Volcanoes make plate boundaries literally perceptible; therefore, the different types of eruptions that are creating specific landforms are explained. One type of plate boundary is addressed in particular detail in this chapter: on mid-ocean ridges, new oceanic crust is formed, which we make disappear again in the following chapters. In the mountains, we often find slices of oceanic crust with all the respective rocks present, so-called ophiolites. They mark the suture between the colliding continents. The effects of buoyancy are responsible for the uplift of a mountain range. There is interesting feedback between isostatic uplift and erosion and between climate and tectonics that also affect the elevation of mountains.

In subduction zones, oceanic crust plunges into the Earth’s mantle, with a chain of explosive volcanoes rising above. Such convergent plate boundaries exist both within oceans, forming an island arc, as well as on active continental margins, creating mountains like the Andes. In the Andes, long gaps within the “ring of fire” illustrate that some segments of active continental margins have a completely different dynamic. The Rocky Mountains in the USA show that mountains can even be formed far away from plate boundaries. Several examples introduce the effects of a collision of an island arc with a continental margin. As we will see later, this chapter provides an important basis for understanding most mountain ranges.

4.1 Island Arcs and Active Continental Margins
4.1.1 Accretionary wedge or abrasive paper
4.1.2 Magmas and metamorphism
4.1.3 Diving into hell
4.1.4 Compression and Extension
4.1.5 Mariana Arc
4.1.6 Sunda Arc in Indonesia
4.2 The Andes
4.2.1 Central Chile to Northern Patagonia
4.2.2 Aconcagua and the Sierras Pampeanas
4.2.3 Central Andes and the Altiplano
4.2.4 Snow White behind the 30 Mountain Giants
4.2.5 Ecuador, Colombia and a detour to Central America
4.2.6 Patagonia and Tierra del Fuego
4.3 Subduction and Accretion on the Western Margin of North America
4.3.1 Mexico
4.3.2 The Mountains of the Western USA
4.3.3 The Rocky Mountains in Canada
4.4 Collision of Island Arcs and Obduction of Ophiolites
4.4.1 New Guinea
4.4.2 Taiwan
4.4.3 Philippines

On a strike-slip fault, two crustal blocks slide past each other laterally. The fault is not always optimally aligned with the direction of movement, and there can be sections with a concurrent component of compression (transpression) or of extension (transtension). This results in the uplift of mountains or the subsidence of a basin, e.g., Mount Lebanon and the Dead Sea. Both components of displacement are often partitioned between several faults, with thrust faults systematically arranged around the strike-slip fault. There are ramps and flower structures. The most spectacular mountains created by strike-slip faults are the Southern Alps in New Zealand and several ranges in Alaska. Another instructive example is the Altai in Asia.

Mountains are not only formed by compression and constriction but also by the opposite, by extension. The result is a rift valley (graben), bounded on both sides by normal faults. Classic examples are the Upper Rhine Graben between Vosges and Black Forest, as well as the East African Rift System with mountains such as Kilimanjaro and Rwenzori. While the rift valley is subsiding, the adjacent crustal blocks can be uplifted to form highlands. Currents in the mantel play an important role; they are also responsible for the associated volcanism. Mountains on passive continental margins as in Norway, India or South Africa are also related to rifting. Extension can also affect a high mountain range; it can literally flow apart under its own weight. Ironically, the results of such an orogenic collapse are again mountains, as exemplified by the Basin and Range Province in the western USA. Usually a mantle plume is held responsible for intra-plate volcanism on hotspots, i.e., a current in the mantle ascending from great depths. However, whether this applies to all hotspots –and even the very existence of mantle plumes – is disputed.

6.1 Hotspots and the Highest Mountains in the World
6.1.1 Hawaii
6.1.2 The Canary Islands
6.1.3 Iceland
6.1.4 Flood Basalts
6.1.5 Yellowstone
6.2 Introduction to Continental Rifting
6.3 The East African Rift
6.3.1 The Ethiopian Highlands, Afar, and the Turkana Depression
6.3.2 The Western Branch of the Rift System
6.3.3 The Eastern Branch of the Rift System
6.4 Rifts and Uplands in Central Europe
6.4.1 Upper Rhine Graben, Black Forest and Vosges
6.4.2 Alcove Lands and Swabian Jura
6.4.3 Ore Mountains, Thuringian Forest and Harz Mountains
6.5 The High Atlas
6.6 Mountains on Passive Continental Margins
6.6.1 Western Ghats in India
6.6.2 The Cape Fold Belt and the Great Escarpment in South Africa
6.6.3 Uplift in Scandinavia
6.7 Collision and Collapse in the Wild West
6.7.1 Basin and Range Province
6.7.2 The Recent Uplift of the Sierra Nevada
6.7.3 The Teton Range

Chapter 7 – The Roof of the World: High Mountains of Asia

The fierce continental collision of India and Eurasia not only created the Himalayas and the Tibetan Plateau but also all other ranges with summit elevations exceeding 7000 m. At first glance, the Himalayas are a relatively simply structured range with thrust faults and nappes, but the details are less clear and lead to discussions. According to some, the middle crust was so hot and soft that it started to flow and was pressed to the surface like toothpaste from a tube (channel flow). Additionally, what happened at both ends of the Himalayas, where the range bends around a corner? In this chapter we also visit the other high mountain ranges of Asia, including Caucasus, Zagros, Pamir and Tian Shan. We will also find out how high-pressure rocks manage to escape from a subduction zone and how they are integrated into a mountain range.

Chapter 8 – The Alps and their Siblings

The Alps are a particularly complicated mountain range – but well researched. In this chapter we learn about the formation of the Penninic Ocean, the early collision in the Eastern Alps (eo-Alpine orogeny) and, finally, the continental collision of Europe and the Adriatic Plate (Alpine orogeny). We explore the structure of nappes with the corresponding thrust faults and take a detailed view on the ophiolite of Zermatt and the Tauern window. The closure of the Penninic Ocean led to the formation of numerous other mountain ranges in the Mediterranean, including the Sierra Nevada in Andalusia, Rif and Tell Atlas in northern Africa, and the Apennines in Italy, as well as the Carpathians, Dinarides and the Hellenides in the east and southeast of Europe.

8.1 An overview of the Alps
8.2 An Ocean Emerges
8.2.1 A Shallow Sea Floods the Continent
8.2.2 Opening of a Deep Ocean
8.2.3 Eo-Alpine Orogeny and the Austroalpine nappes
8.2.4 The Maximum Extent of the Ocean
8.3 The Collision in the Alps
8.3.1 The Accretion Wedge becomes a Mountain Range
8.3.2 Around Zermatt
8.3.3 Slab Break-off and Late Phase of Mountain Building
8.3.4 A View through the Tauern Window
8.3.5 The Recent History
8.4 Between the Apennines and Gibraltar
8.4.1 Corsica and Sardinia
8.4.2 Apennine Mountains
8.4.3 Tell Atlas, Rif and Betic Cordillera
8.4.4 Calabria, Sicily and the Volcanoes of South Italy
8.5 Pyrenees
8.6 East of the Alps and the Adriatic Sea
8.6.1 Dinarides and Hellenides
8.6.2 Hellenic Arc and the Aegean Sea
8.6.3 Carpathians and Balkan Mountains
8.7 Time Travel to the Palaeozoic Mountain Formations
8.7.1 The Caledonian Orogeny
8.7.2 The Variscan Orogeny