On the Ring Road through Iceland, with the trek from Landmannalaugar to Skogarfoss and other hikes

Landmannalaugar is a fantastic landscape of pastel-coloured hills, obsidian flows, hot springs (also for bathing) and fumaroles (see also my book The Formation of Mountains). From here we first walked the Laugarvegurinn trek (“hot springs path”) in a little more than 2 days to Þórsmörk, a remote valley at the foot of the two mighty ice caps Myrdalsjökull and Eyjafjallajoküll. The path first climbs, passing hissing springs, obsidian glittering in the sun, until it descends into a fantastic green landscape, a panorama with some cone-shaped mountains, a lake and in the background, like the milk froth on cappuccino, the glacier Myrdalsjökull, which from now on always comes into view from a new angle. We continued over desolate black outwash plains on which we hardly felt we were making any progress; we passed a deep gorge and finally the first bush-like birch trees that the Icelanders are so proud of… 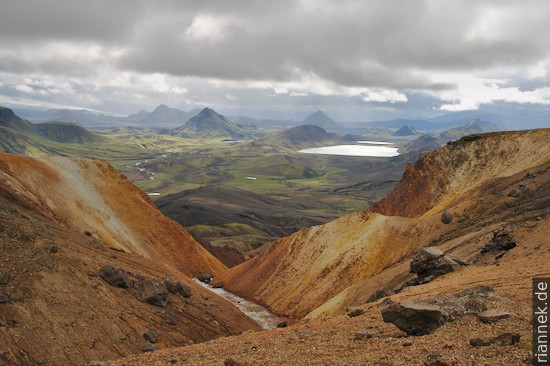 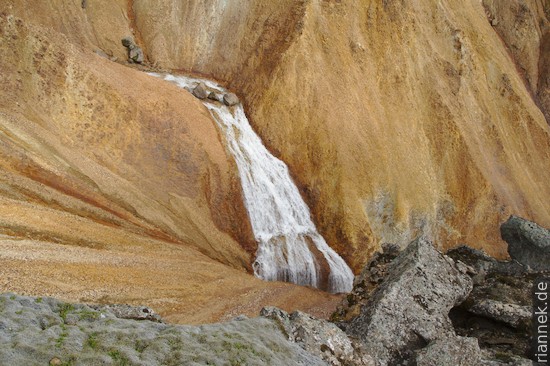 Unfortunately, the weather, which had been “stable” and changeable until then (rain several times a day, sun several times a day), became much worse, so we stayed in Þórsmörk for two days, exploring the gorges, rivers and glacier lagoons, until we set off again in bright weather and crossed the narrow pass between the two ice caps. 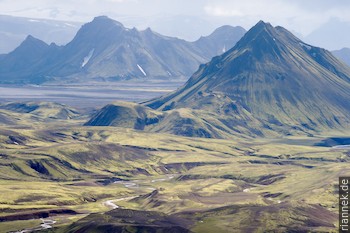 On the other side, the path descends along a series of really beautiful waterfalls to the impressive Skogarfoss, which plunges the last 60 m down to the coastal plain. Next door in a museum, we learn a lot about the hard life the inhabitants led here. When the weather became colder in the late Middle Ages, it was no longer possible to grow barley; all that was left was sheep farming and (mainly as a winter occupation) fishing. It was not until the 19th century that the peat houses, which resembled those of the Vikings, were replaced by prefabricated timber-tin houses imported from Norway and Denmark. Those who moved at that time even dismantled the entire house and took it with them.

In Vik, in the far south, we made a short stop to watch the puffins nesting in the cliffs. The birds look almost like penguins with colourful beaks and are a bit clumsy when not in the water. Flying, with frantic wing beats, seems to work just fine, but taking off and landing looks almost suicidal. In fact, they only spend the short summer on the coast, the rest of the year on the open sea.

Skaftafell National Park protects part of the huge Vatnajökull, the glacier that dominates the south-eastern quarter of Iceland. We climbed two lookout mountains (Kristinartindar and Jökufell) with impressive panoramas over several glacier tongues flowing down from the ice cap, but were quickly driven back by an icy wind. Below, the large outwash plain spreads out towards the sea. Whenever one of the volcanoes below the glacier erupts, a huge flood of meltwater pours over it; the Jökulhlaup during an eruption of Grimsvötn in 1996 destroyed bridges and icebergs the size of houses rolled across the plain. A little further on, just off the main road, is the photogenic Jökulsarlon Lagoon, filled with icebergs from the glaciers calving into it.

On the way north, we made a detour to Seyðisfjörður, one of the fjords in the east; deep blue water lined by steep walls of basalt flows.

Myvatn is a large shallow lake in the north, dammed by a lava flow. It is famous not only for the birds that breed here, but also for the volcanic landscapes of the surrounding area: the pseudo-craters on the shore, formed when lava flows entered the shallow lake and the water vaporised and explosively jetted through the lava flows; several tuyas in the background, flat-topped and steep-sided volcanoes formed by eruptions under a glacier; a tuff ring; an area of fumaroles, solfataras and boiling mud pots; and the shield volcano Krafla, where several eruption fissures, a crater lake, etc. can be seen and energy is generated in a large geothermal power plant.

In persistent drizzle, we walked along the canyon in Jökulsargljufur National Park (I didn’t even try to pronounce the name), sometimes a deep canyon lined with colonnades of black basalt with mighty waterfalls (Dettifoss is considered the mightiest in Europe), sometimes it cuts through a series of cinder cones, with mounds of red and black cinders and strangely shaped rocks with basalt columns jumbled in all directions. The trek ends at Asbyrgi, a 100-metre-deep, horseshoe-shaped canyon formed by a massive jökulhlaup. By now, our backs were completely strained and our fully soaked backpacks seemed twice as heavy as when we started.

Husavik is considered a whale-watching mecca, yet we saw nothing at all on our first attempt because of the weather, the boat was rocking through the rain plumes… A few days later we saw two minke whales. But one wonders what the animals think, when every time they come up, boats with tourists come rushing from all directions… The days in between brought us to Godafoss (we still didn’t have enough of waterfalls) and to Akurery, the tiny metropolis of the north.

A few peat houses later, we took the bus to the Westfjords, a remote region where even the main roads that wind along the coast, fjord after fjord, are only partially paved. In our case, the bus turned out to be a jeep, which also left 5 minutes too early and therefore, after a call to the mobile phone, had to go back again to pick up a woman who had been forgotten at the petrol station…. The “bus driver” kept stopping at beautiful viewpoints, grinning and saying “five minutes” to me and lighting a cigarette. In Isarförður it turned out that summer is already over here in mid-August and the boat service to the remote peninsula of Hornstrandir has been discontinued…. Instead, we hiked for two days through the beautiful “Alps of the Westfjords” near Þingeyri. 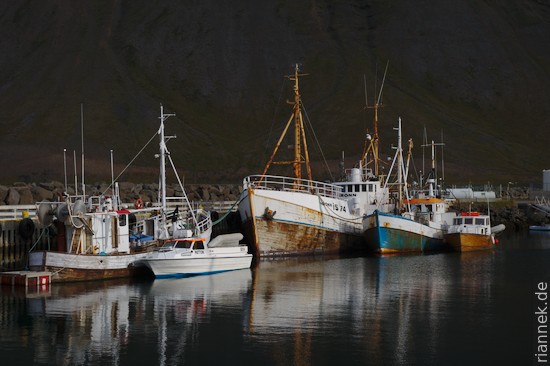 A ferry took us to the Snæfellsnes peninsula, the end of which is overlooked by a glacier-crowned shield volcano. However, the mountain was almost continuously covered in thick clouds. The idea of walking from Anarstapi (in the south) to Hellisandur (in the north) along the coast in two days turned out to be not so good. The first part was a nice path with great views of the cliffs and the bays, with rock gates and sea stacks, but soon the paths got lost and we stumbled, now really in the wilderness, over extensive lava fields. The few streams marked on the map were mostly non-existent, so that in the end we had to drink from a small puddle of bog.

The idea that Icelandic farmers used to spend winters here in remote fishing stations, going out to sea in the freezing cold and even having to haul the water in on foot sends a shiver down my spine. While at the beginning of the settlement mainly woollen fabrics were exported, in the late Middle Ages fish became the most important commodity: in Europe, demand had increased due to Christianisation and meatless Fridays, and later Icelandic fish oil burned in the street lamps of major European cities.

We spent the remaining three days in Reykjavik and in the area known to tourists as the “Golden Circle”. In Þingvellir National Park there is a series of crevices, mini rifts, where the plate boundary between Europe and North America can be figuratively seen. Here, in the 10th century, the early settlers who had fled the tyranny of the Norwegian monarchy formed their first parliament. Once a year, a kind of political and cultural festival was held here, to which people travelled from all over the country.

I was particularly looking forward to Geysir. The eponymous geyser itself erupts only very rarely, but its reliable little brother Strokkur was spectacle enough for us. Every 5-7 minutes, for maybe a second, the surface of the water curves into a hemisphere from which the fountain shoots out to a maximum height of 30 metres. The last highlight, Gullfoss, is only a few kilometres away, another impressive waterfall… Reykjavik itself is after all more than half the size of my home town Freiburg…, briefly a small town with a few nice corners, cafés and a good national museum.

On the way to the airport, we jumped into the Blue Lagoon, a thermal bath that makes ingenious use of the waste water from a geothermal power plant. A good end after five weeks of heavy backpacks and cold wind.