In the capital of Cambodia 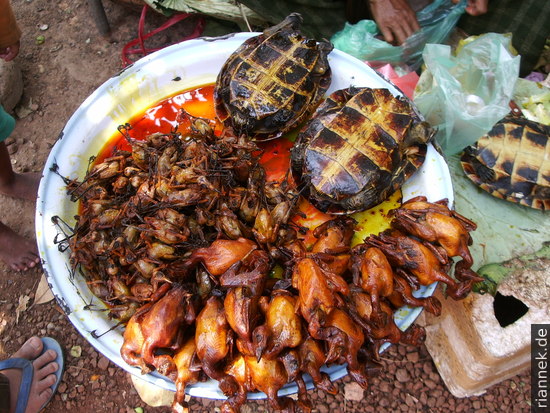 I start to enjoy these motorbike taxis: the driver has my big backpack on his lap, I have my daypack on my back and so we cruise through the dense city traffic to the guesthouse. It is built entirely of wood on stilts, on the shore of a small lake.

Apart from that, this city does not have much to offer. A few excellent sculptures from Angkor are in the National Museum, there is a temple, the former prison S-21 keeps memories of dark times alive, colourful markets… Some travellers swear by the many bars, but I’m not a big fan of dancefloor hits. Instead, I take a little detour to Sihanoukville, to the sea. (There, the boy in the restaurant actually claims that baguette is Cambodian food).

In a kind of paranoid delusion, I can’t shake the feeling that all the girls smiling at me are hoping that I will take them to bed for a few dollars. Bitter to see all the old geezers with their pretty young “girlfriends”. Even more bitter is the point in the house rules of the guesthouse that underage children are not allowed!