A journey to ice and tugtupite

The green part of Greenland is a puzzle of lichens and moss pads, bogs and lakes, rocks polished by glaciers and waterfalls. Behind the mountains, shining white like a fog bank, the ice sheets is visible, with wide glaciers streaming down towards the sea. Blue-white icebergs float on the fjords that criss-cross the area like a net. 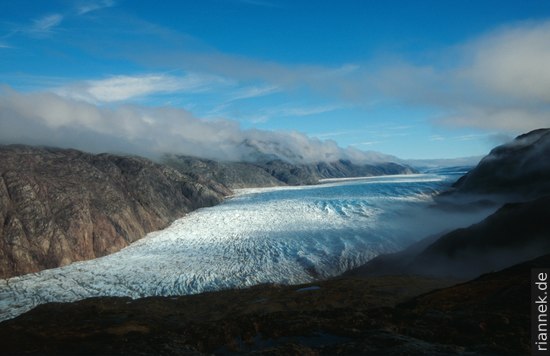 But South Greenland is also impressive geologically. The agpaitic Ilimaussaq intrusion, which formed in the Proterozoic with the Gardar rift, is one of the most spectacular occurrences of highly peralkaline rocks: extreme (and not yet fully understood) fractionation of alkali basaltic or nephelinitic magma has formed melts with extreme compositions. The content of alkalis is so high that there is not enough aluminium to incorporate them all in feldspars. Elements such as Zr are also extremely enriched. The rocks therefore contain complex alkali-Zr-Ti-SEE silicates such as the red to pink eudialyte. Many of the occurring minerals, some of them very rare, such as the pink semi-precious stone tugtupite, are fluorescent and attract mineral hunters (See also Rocks and minerals from Ilimaussaq and my book The World of Mineral Deposits).

For one week we camp at Kangerluarsuk, where three diploma students from Tübingen are working; near Lakseelv, where salmon try to jump up the small waterfall. The rock face south of the fjord is horizontally striped by magmatic layering, the rock is called kakortokite and it formed as cumulate on the bottom of a magma chamber. The alternating light and dark layers consist of varying amounts of white feldspar, black arfvedsonite (amphibole) and red eudialyte. Often, however, the rock face is not visible and the rain penetrates through the jacket and rain pants. Over time, we even get used to clammy clothes and wet shoes for days.

While the diploma students continue their work, a small group of us borrows deep-sea kayaks and we paddle around the icebergs drifting off Narsaq. The town of 2000 inhabitants is a product of the Danish colonial policy of the 1950s, when the Innuit, who lived as hunters in the wilds, were taught to live a “civilised life”. Many here are frustrated by the lack of prospects and invest their money in alcohol. Apart from the sheep farms, crabbers and the small seal fur factory, there are hardly any jobs. 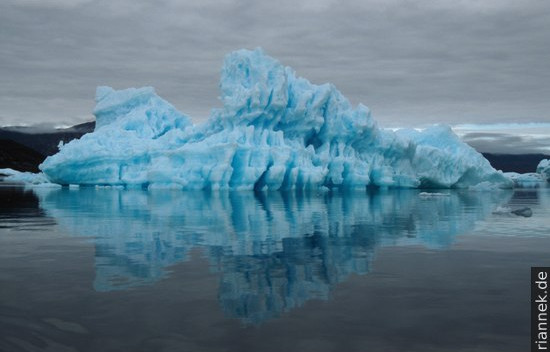 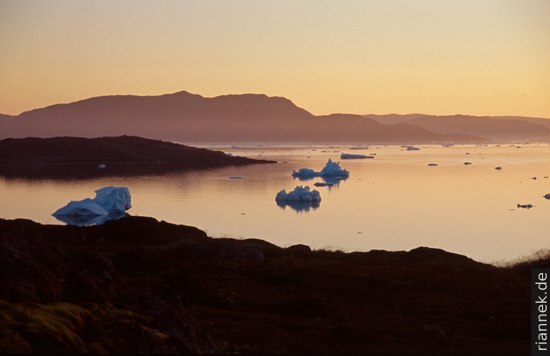 We lug our heavy backpacks in changeable weather towards Qassiarsuk. The space freed up after the meal is filled up again and again with rock samples … Erik the Red settled in Qassiarsuk in 982 AD after being banished from Iceland; his son Laif Erikson discovered America from there. Apart from the foundation walls, there is a tiny reconstructed church and a longhouse. 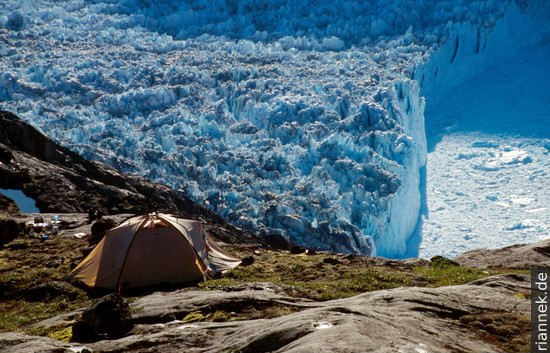 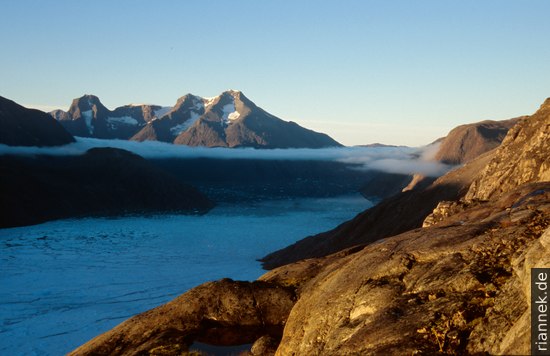 In the last week I hike with Oli through Mellemlandet, which is enclosed by glaciers and fjords. Finally we have stable weather for days. Deep below our campsite, a glacier riddled with crevasses calves into the fjord with a loud roar, the water covered with a dense layer of ice floes. A day later, our gaze wanders over the glaciers coming down from the inland ice from all directions, flowing around mountains, nunataks, branching and coalescing … The last night in Greenland finally brings us northern lights that flicker across the sky for hours. 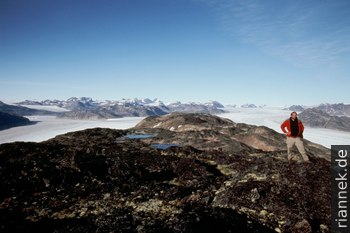 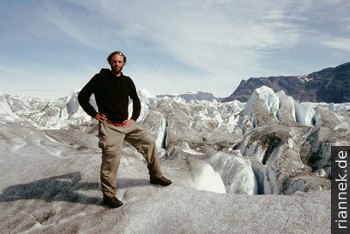