¡Zapata vive! The occupation of the colourful colonial town of San Cristobal de la Casa in Chiapas (Mexico) on 1 January 1994 was the start of the EZLN rebellion. Today, Zapatista dolls and Subcomandante Marcos shirts can be bought on every corner here, because the guerrillas had finally conquered the hearts of the left in the metropolises. “Everything for everyone, but nothing for us.” Instead of conquering power, self-governing structures were built. While the Zapatistas roam the forests, the New Year catches up with us here….

In Palenque I have my first contact with the Mayas, but back in Guatemala this first impression pales in comparison with Tikal: a multitude of steep pyramids rising into the sky from the jungle, most of the smaller ones still overgrown by dense forest, in whose trees toucans, monkeys and parrots can be discovered… Tikal was one of the most powerful of the city-states of the time, there was also then a kind of bloc formation between the great hostile rivals and their vassal states.

The journey to Gracias in Honduras takes almost 20 h in 7 different buses, on the way Marta forgets her camera in the bus, later a drunkard tries to steal her jewellery and then her house (where there wasn’t much to get) in Gracias has been broken into… While I get some rest in this tiny sleepy town with dusty streets, Marta dives back into her daily routine, teaching for a year in a small bilingual school nearby. Shortly behind, the Celaque National Park begins. An enchanted cloud forest grows in the summit area of this extinct volcano, the highest mountain in Honduras, where there are surely not only pumas and quetzals, but also fairies and goblins.

On the way back to Guatemala, I stop in the Mayan city of Copan, which is known above all for the delicacy of its sculptures. But I am also impressed by the tree-covered steps of the temples in the atmospheric morning light. The well-preserved ball court is also well-known. The game was played with a heavy ball made of solid rubber, held up only with thighs and hips. However, it was less a game than a religious ritual. And often the lives of a team were at stake. After centuries of prosperity, the city probably perished in an ecological catastrophe, due to overpopulation, deforestation, leaching of the soil… 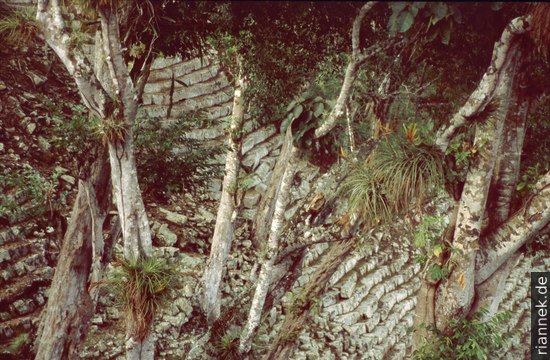 I spend the last few hours back in Antigua, in a melancholy mood. Fuego greets with small ash clouds and I wish I had more time. As always, far too short!