Oldoinyo Lengai (expedition report 2003 with further explanations and references) is well known for its strange lavas: natrocarbonatite is only found here, and at the same time it is the only active carbonatite volcano in the world. But the silicate rocks that make up most of the volcano are also unique, such as combeite nephelinite and wollastonite nephelinite (Klaudius and Keller 2006, Lithos 91, 173-190). Wollastonite and nepheline can be seen well in the rocks, but the rare combeite is too small.

Of course, other minerals typical of alkaline volcanism are also found, including aegirine and the black titanium garnet melanite. Phlogopite glitters everywhere in the tuffs of the wider area.

Olivine melilites are presumably the primitive magmas from which the volcano’s highly evolved magmas were formed. However, this rock (as lava or tuff) only occurs at the explosion craters in the wider surroundings of the cone. 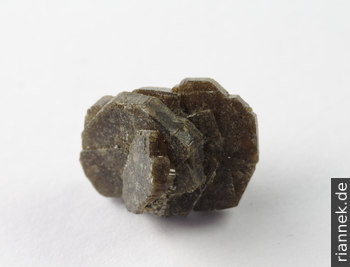 Amazingly large crystals of melilite can be found at Oldoinyo Lengai itself, these have a very “evolved” composition with high contents of Fe and Na. This makes it a new mineral of the melilite group, which has been given the name alumoakermanite (Keller et al. 2006, Lithos 91, 150-172; Wiedenmann et al. 2009, Mineralogical Magazine 73, 373-384).

In the escarpment of the East African Rift between Oldoinyo Lengai and Lake Natron, flood lavas are exposed. Among them also a beautiful porphyritic nephelinite (Neukirchen et al. 2010, Journal of African Earth Sciences 58, 734-751).

During a high water level of Lake Natron in the Pleistocene, stromatolites grew on the slopes surrounding the lake today (Icole et al. 1990, Sedimentary Geology 69, 139-155). The layered calcareous deposits are the product of cyanobacteria – a very early form of life, which, however, still occurs today in Shark Bay (Australia), for example.

At Lake Natron itself, a salt playa forms in the dry season, in which mainly various sodium hydrogen carbonates are deposited.