A wonderful old city in the north of Syria

The bazaar has a very special atmosphere today, because there is a power cut. Generators are rattling in some corners, but many shops only have candles or torches to illuminate their wares. The dark vaults are nevertheless packed with people, heavily laden carts are manoeuvred through the masses, black-veiled women move past me like shadows. The scent of spices and perfume hangs in the air, nuts and dried fruit pile up, noble fabrics are spread out in front of the customers. In the shoe bazaar, I take a closer look at the stacked boxes and notice that the tradition of the Silk Road is being upheld here: “Made in China” is written on almost all boxes…

I watch a black-veiled woman peering under the shiny gold mini-dress of a mannequin, next door walking sticks are being made, a little further on mutton halves hang from rakes on the wings of a heavy metal door. Suddenly a choleric man asks me where I’m from, he’s firmly convinced I’m Israeli, and he looks like he’s about to plunge a dagger between my ribs. Strangely enough, I had met an Adolf fan only a short time before, who is happy as a lark about every German he meets. Anyway, I escape the fate of the mutton and continue to the Umayyad Mosque. I stroll through it with an Arab with a long beard, in whose face every wrinkle seems to be laughing. We chat splendidly without understanding a word. If I interpret his gestures correctly, he is a woodcarver from Qatar, thrilled to be here, thrilled to meet me. Another is firmly convinced that the economy in Europe is only not doing well because we don’t have an Arab-friendly policy … He thinks President al-Assad is good, that he wants peace, even with Israel, and that it is good to have peace with one’s neighbours. I can only agree with that, even if I don’t think it’s America’s fault alone that things haven’t gone that far by now. And even if al-Assad inherited his office, as is customary in this region, from his father, who had couped his way to power against his own party in the 1960s. That the father allied himself with the Soviet Union can still be seen in the many old signs that read “Factory Sale” or something similar in Russian. Thus the Syrian Baath Party stood in contrast to the Iraqi one. The police state became famous, among other things, when an uprising by the Islamist and semi-fascist Muslim Brotherhood ended in a huge massacre. No one knows exactly how firmly the son is in the saddle, but in any case a sign on the border reads “Welcome to the Syria of al-Assad” as if it were a kingdom. 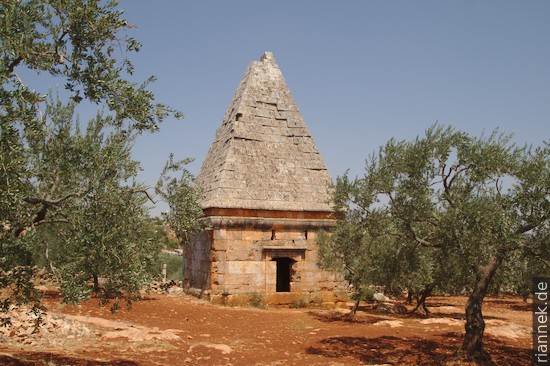 In the wider surroundings of Aleppo are the ruins of several Roman or Byzantine cities, sometimes on a barren, karstified plateau, sometimes hidden in an olive grove. The remains of the once huge basilica of St. Simeon are particularly impressive. The eccentric saint once spent his life sitting on a high column here. Because of such nonsense, one was still admired back then!