Splashing in salt water, the gorge in the Wadi Mujib reserve and Byzantine mosaics (Jordan)

In case anyone uninitiated passes by, there are large warning signs along the road: “Caution! Extremely salty water!”. It is well known that you float like a cork in the Dead Sea. But to actually experience how the salt water pushes you upwards is something else. Very funny, really! For example, breaststroke is impossible here; when I try, my legs row helplessly around in the air.

The water tastes sharp and sour, I guess it’s the taste of MgCl, which makes up more than half of the salt content. I splash around at Amman Beach, where the Jordanians also go. The women, of course, enjoy the water fully clothed and only up to their ankles. Black robes, with headscarves. Oh, but a few Jordanians in bikinis were there too, earning interested glances especially from the black-clad women. 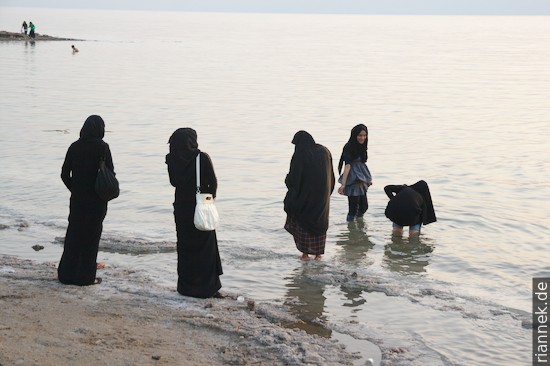 But it is also worth going to the shore at a remote spot. Thick salt crusts form the shore here, partly with bizarre shapes like knobs, sharp ridges, stalactites, small pools…. If you get stuck somewhere in the mud, it’s not bad, it’s supposed to be good for the skin.

The Dead Sea is, of course, the deepest point I have ever been to. Even a few metres lower than it was on my trip to Israel many years ago: the water level is dropping pretty fast. At the moment it is at -420 m.

The entrance of the Wadi Mujib gorge is adjacent to the Dead Sea. It is a deep slot canyon, only a few metres wide, through which a stream flows. I splash up the stream, climbing the attached ropes and ladders past two small waterfalls to get to a larger one. Pretty.

Madaba is situated between Amman and the Dead Sea, it is the most Christian city in Jordan and here you will also find some impressive Byzantine mosaics. The most famous is the map of the Holy Land, of which unfortunately only parts have survived. Jerusalem, the Dead Sea and the Nile, which the unknown artist took the liberty of letting flow from east to west (after all, everything comes from the east, the sun, the Messiah, etc., I am told), can be seen clearly. The other mosaics show, apart from Christian motifs, animals and ornaments, mainly representations from Greek mythology, which had obviously not yet been displaced by the new religion.

Nearby, on the edge of the Jordan Rift Valley, is Mount Nebu, one more sacred site in my collection. From here, after a long march through the desert, Moses finally saw the Promised Land. However, he did not see much more after that, he died on the spot. As it should be, from here I too get my first glimpse of the Promised Land (and the Dead Sea) after a long journey, but without immediately losing my life. Hundreds of pilgrims and Bible tourists crowd around me; this is where serious Bible territory begins.