Three days hiking on the north side of Chimborazo (Ecuador)

Chimborazo must be somewhere there in the clouds, above the green, rolling hills. I hike off the Panamericana with a description from “Trekking in the Central Andes” (Lonely Planet) in my pocket, past isolated farms and upwards. After about half an hour a dog arrives, sniffs and then runs after me, unimpressed that I try to send it away. We pass some pastures with black bulls standing on them, the dog yaps at a donkey like an idiot and then continues to run along. Further up, we pass tufts of puya grass, and when the dog jumps through them after a bird, little clouds of dust rise: the grass is full of ash from the active volcano Tungurahua. In the evening, as I pitch my tent next to a tiny lake, the clouds recede and above me looms Chimborazo, long thought to be the highest mountain in the world (see also my book The Formation of Mountains). From this perspective, very close to the huge ice dome, it looks strangely stretched out. I imagine Alexander von Humboldt and his companion Aimé Bonpland trudging up there. Opposite, the neighbouring volcano Carihuairazo, dissected by glaciers into a rocky double peak. In the other direction, the rock face of El Altar appears, once another huge volcano, of which only a spectacular ridge remains since a flank collapse.

The next morning I sit in the thick fog, at least the sleet soon stops. The dog lies coiled up next to the tent, although I had seriously tried to chase it away in the evening. All day we hike through fog, mostly through wide swamps or up steep slopes, which reminds me a lot of Scandinavia…. Only the cushion-shaped plants don’t match. From the pass between Chimborazo and Carihuairazo, I climb a ridge a little way up the latter mountain and then, with 20 m visibility, try to find a small lake with compass, altimeter and mind according to the vague description “30 minutes pathless to the east”. Of course, the compass needle points sometimes to the valley and sometimes to the summit, eventually I find a perfect (flat and dry) spot at the outlet of a small pond and pitch my tent. 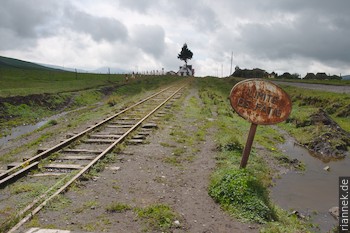 The next morning my tent is covered with a layer of ice. The dog was lying next to the tent again, shivering slightly, but as soon as I came out, the beast jumps up and runs after a vicuña that had just been looking over at us curiously. A little later the fog lifts and the ice dome of Chimborazo is visible, a magnificent sight. I also find the lake now, behind a small moraine a little above. After an hour it is foggy again, and I have to search for a way down with further vague descriptions. The dog is not so brave any more and almost always toddles along at my heels. Finally, we are back below the clouds on a proper path and march back to the Panamericana. Shortly before I get there I cross the old cobblestone road where I had first met the dog. This time he remains sitting at my gestures and looks sadly after me. Maybe he is waiting there now for the next hiker.

Travelogue Andes 2010
Quito in the rain, caldera lakes and market in Otavalo
Laguna Quilotoa
Climbing Cotopaxi
Tungurahua and Baños
The Formation of Mountains