The “Stone Forest” in Bulgaria 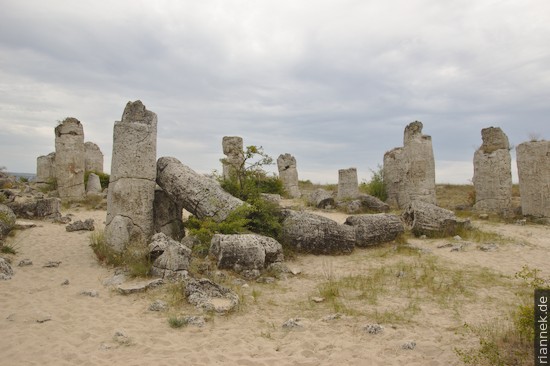 I always like to look at geological curiosities. An example is the so-called “stone forest” or even “petrified forest” near Varna in Bulgaria. At first glance, the sandstone columns actually look like tree trunks. However, petrified forests such as those in Arizona or Argentina are made of cryptocrystalline SiO2, not sandstone. In the sandstone columns of Varna, the sand grains are cemented with calcite, they have weathered out of unconsolidated sand from the Eocene. And they are hollow, i.e. tubular.

A whole series of formation models have already been proposed. Rather obscure is the idea that carbonate-rich water seeped down from a limestone overlying the sand and formed dripstones within the sand. According to another hypothesis, these are algal mats (i.e. the deposits of microorganisms). But the columns look somewhat different from the usual stromatolites.

The most credible hypothesis seems to me that these are upwelling pathways of methane that leaked from the seabed. Such methane seeps are by no means rare and indeed the carbon isotopes fit this model. In this case, too, microorganisms play an important role, presumably anaerobic bacteria, whose metabolism consumed methane and sulphate and released hydrogen carbonate, changing the chemistry of the pore water in such a way that calcium carbonate was precipitated.

The Visitor Centre, however, is probably run by less scientific staff. The explanatory panels end with esoteric nonsense about being a power place and suggests hugging the pillars to absorb the healing energy.

The approach is easy: from Varna, take the motorway towards Sophia and then the first exit after the airport, there is already a brown sign on the motorway.