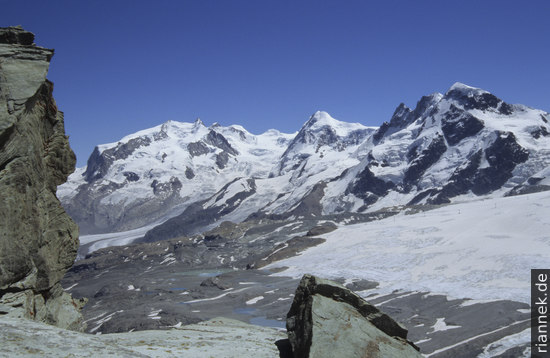 The rocks of the Zermatt-Saas zone are an ophiolite, i.e. originally oceanic lithosphere (of the Penninic Ocean, the deep-sea basin of the Alpine Tethys). However, the unit is highly deformed, so that the normal sequence of serpentinite (mantle), gabbro, basalt and sediments cannot be found in one piece. Furthermore, they were metamorphosed (eclogite facies, retrograde blueschist / greenschist facies) during the subduction of the Tethys. The serpentinites contain some forsterite (almost white), diopside (white), magnetite and Ti clinohumide (brown). The spectacular “Allalin gabbro” is an eclogite-facies metagabbro with large plagioclase and omphacite, plus some Mg-chloritoid. Some of the basalts occur as pillow lavas, known are pillows with eclogitic core, retrograde blueschist facies towards the rim and greenschist facies at the rim of the pillows. In the Saas Fee area, the metabasalts occur retrograde as greenschist. 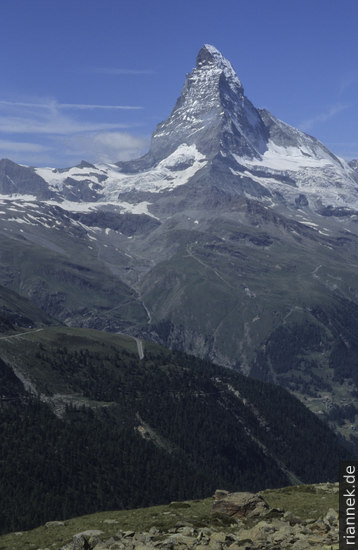 Above the ophiolites is the imbricated Combin zone (e.g. on the path to the Hörnligrad hut), with lenses of greenschist, eclogite, serpentinite, dolomite etc. in predominantly calcareous mica schist (=deep-sea sediment).

Above these Penninic units lies the Dent Blanche nappe as an Austroalpine klippe, with predominantly gneisses, but also gabbro (Matterhorn gabbro). This nappe includes Matterhorn (from a little above the Hörnligrad hut to the summit), Dent Blanche, Obergabelhorn, the upper part of the Weisshorn, etc. It is the basement of the Adriatic Plate, once located south of the Alpine Tethys.

Beneath the ophiolite zone are other Penninic nappes, for example the Monte Rosa nappe (esp. granite and orthogneisses) and the Siviez-Mischabel nappe (gneisses, sediments). 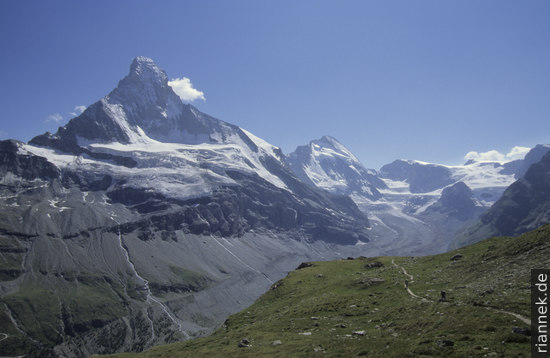