Trekking around the Annapurna massif: the Annapurna Cirquuit is one of the most popular long-distance treks in the Himalayas and in the short trekking season up to 200 people start every day. Accordingly, there are simple lodges at short intervals, with a menu that is always the same, from Dal Bhat to Pizza to Swiss Rosti. Some people refer to this somewhat pejoratively as “teahouse trekking”…

At first, we pass through a deep, lush green valley, with no sign of the high mountains on either side. Tiny rice fields cling to the steep slopes between mighty migmatite rocks, some of which are also cultivated with hemp. The road is quite wide all the way. While caravans used to come from Tibet with salt, today this is the only access to hundreds of pretty villages. Accordingly, there are many villagers on the road, mule caravans and heavily loaded porters in flip-flops transporting all kinds of goods uphill.

As soon as have I reached the back of the Himalayas, approaching the tree line, the glimpses of mountains become more frequent. It becomes drier and the villages are Tibetan, with prayer wheels and flags, etc. The dryness is more theoretical though, as I arrive in Manang it rains. The rain turns into snow and it snows non-stop for the next three days until everything is covered by a layer of fresh snow almost a metre thick. I am still almost 2000 m below the pass! Normally it doesn’t snow before December, but what is normal. In the “waiting room” Manang, wild rumours are circulating about the situation further up, hundreds are making their way back in frustration. I wait for better weather and then – it is cloudless – set off on the ascent with a few others with whom I have joined in the morning’s discussion about the weather. At times we dig through the deep snow to avoid an avalanche-prone slope. Three days later we cross the Thorung-La Pass, in the days before the first had dug a path into the snow. Over 5400 m, that will remain my highest point for the time being.

On the other side I visit the temples of Muktinath, in one natural gas emerges from a crevice and burns in a small blue flame since time immemorial. Soon I emerge from the snow again, brown tones reminiscent of Tibet dominate again for a while. I follow a river valley southwards, it slowly becomes greener. At times I pass through the unspectacular deepest gorge in the world – there are a hell of a lot of “deepest gorges in the world”, this one is measured from the summits of the 8000-metre peaks on both sides, but they are almost 40 km apart and there is nothing at all to see of them on this section… 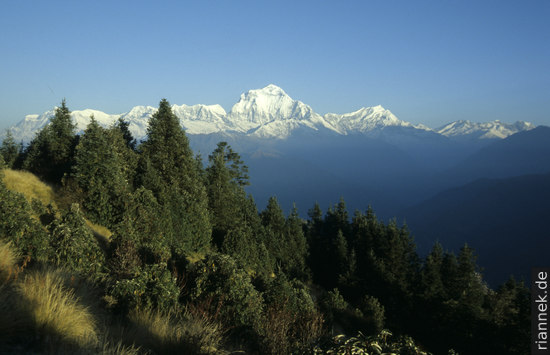 During the long ascent to the classic viewpoint Poon Hill I am surprised by a thunderstorm with hail, but at sunrise I have a clear view of Dhaulagiri, Annapurna I, etc. I am in an area controlled by Maoist guerrillas and young enthusiastic comrades from the CPN (Maoist) collect (unarmed) the 15 $ revolutionary tax from the tourists. Against receipt, of course.

It takes me only two days (instead of 4 to 5) from here to the Machapuchare Base Camp, a short walk below Annapurna Base Camp. At the ABC I am surrounded in all directions by mountains over 7000m, a fascinating view.

In the meantime I am back in Pokhara, after exactly 3 weeks on foot I have also had enough.