The Langtang Valley, in the mountain range closest to Kathmandu, is the destination of this popular trek in Nepal. Vantage points such as Tsergo Ri, Kyanjin Ri and Morimoto Base Camp are worthwhile, with views of large glaciers and some six-thousand-metre peaks. A side trip leads to the Gosainkund mountain lakes.

From Kathmandu, the Langtang Himal is the closest mountain range to the Greater Himalayas (cf. my book The Formation of Mountains). Nevertheless, it is a six-hour bus ride to the starting point of the trek, along a narrow road that winds up and down the mountains in never-ending curves. Because of the holidays, the bus was incredibly full. Not only the corridor was packed with people, but also the roof. Because of the lack of legroom, I had to fold my knees up, almost putting my legs to sleep. And at some point I had a child sitting on my lap who could no longer stand and who was holding a plastic bag in front of his face the whole time, although he had long alredy emptied his stomach … 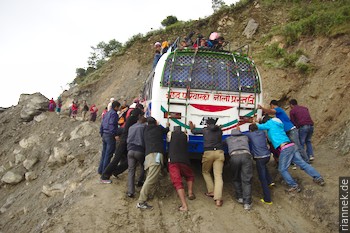 At the steepest part, the bus got stuck in the mud. The road was completely soaked from last week’s rain. It took the combined strength of the passengers to push the bus upwards. It was mid-October, normally the driest time in Nepal, but a typhoon that had submerged India and Bangladesh also brought heavy rains to Nepal. But all Nepalis were convinced that the rains were really over now.

I wanted to hike to the Gosainkund Lakes first and spontaneously joined two Frenchmen who had the same goal. In the morning of the second day, we reached Laurebina, an excellent vantage point, and watched the last mountains (of which up to here only something could be seen now and then) disappear in the gathering clouds. 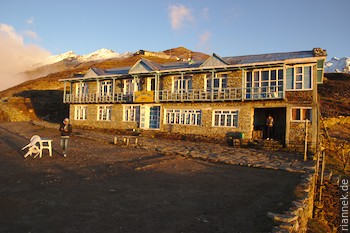 We checked in at one of the two “tea houses” (huts) and in the afternoon I hiked up to Gosainkund, to the lakes that are considered sacred to Hindus. There was fresh snow on the mountains in the background all the way down to the shore, which looked quite pretty. Behind it, one could cross over a pass into the Helambu region and hike to Kathmandu in a few days. That was exactly what the two Frenchmen had in mind, whereas I wanted to go in the other direction into the Langtang valley.

At sunrise we had a great view from Laurebina of Langtang Lirung, the highest mountain in the area, opposite Ganesh Himal and in between mountains that already belong to Tibet. To the left, far away, Manaslu and Annapurna are also visible.

From here I first had to descend more than 2000 m to ascend again to a similar altitude in the Langtang valley. The path leads sometimes across meadows with a view, sometimes through dense rhododendron forest. The lower I got, the hotter it was and soon sweat was dripping from my forehead. Finally I reached the turquoise-green river, which I followed upstream through a densely forested gorge. Now I was on one of the most popular trekking routes in Nepal, so I met many tourists and porters. 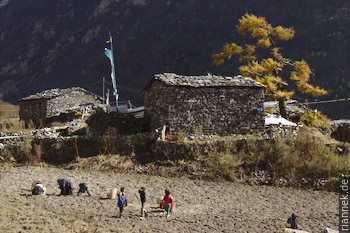 After a night in Rimche, I continued on, and soon a white wall of ice shimmered between the tree trunks for the first time. But it is still several hours of walking before the valley widens and more of the mountains can be seen. In the meantime, I had made friends with a Nepalese student who was also lugging around heavy photo equipment.

The landscape becomes truly spectacular around the village of Langtang. Here we repeatedly hiked along mani walls, piled up from blocks of slate, into which mantras are carved in Tibetan script. Like a stupa, you always pass it on the left. Several times, water-powered prayer wheels can be seen. But shortly before we arrived at Kyanche Gompa in the afternoon, the mountains disappeared in clouds, as they do every afternoon. Most trekkers climb one of the viewpoints from here and then start their way back. However, it is worthwhile to explore the upper part of the valley.

The next morning I wanted to start before sunrise to one of the viewpoints, the Kyanjin Ri (4773 m). Actually, my roommate wanted to come along, but when I woke him up, he just grumbled “too tired” and turned around. So I climbed alone, sitting on a hill high above the village at sunrise, an hour later on the summit. Here, two glaciers in particular are visible, flowing down as steep icefalls from Langtang Lirung and Kimshung. However, I was disappointed how little of the glaciers is left, I had seen much more spectacular photos!

Back at the teahouse, our room was locked and I had no idea where my new friend was. So my plan to hike a day’s walk up the valley to Morimoto base camp was inevitably postponed to the following day … Instead, I climbed a hill on the other side of the valley, on which some prayer flags were fluttering and from which I had a great overview of the valley. In the evening, the key problem was solved.

The hike further up the valley is very spectacular. Every now and then a new mountain giant comes into view, towering in a steep wall of ice directly above the valley floor. Most of them are six-thousand-metre peaks, which is almost tiny compared to Everest, but the steep walls with which they drop into the valley are very impressive.

I passed Langshisa Kharka, an alpine pasture that some trekkers still reach as a day trip, and then climbed up a little-travelled path to the moraine of a large valley glacier.

There was already some snow up here, the last footprint disappeared at some point and I pitched my tent on a flat spot where the map says “Morimoto Basecamp”. At night I had a cosy -8 °C in the tent, outside it was even icier. It took me some time in the morning to dig the pegs out of the hard snow.

The view across the valley glacier up to the steep mountain walls is very impressive.

Back in Kyanche Gompa, I wanted to climb Tsergo Ri (4984 m), the best of the viewpoints: a roundish mountain around which the valley makes a loop, giving you an impressive panoramic view.

Incidentally, Tsergo Ri and the neighbouring “hills” are the masses of a huge landslide, one of the largest ever, whereby the entire mountain flank of Yansa Tsengi (Dragpoche) slid down about 40,000 years ago. Admittedly, a good part of the landslide masses has already been eroded.

I was already well adapted to the altitude and made good progress. In the upper third, I trudged through snow in a good track. No sooner had I taken some photos and eaten something than dense clouds moved in, a few hours earlier than on the last days. Soon I was stuck in thick fog.

As I sat by the warm stove in the evening and it snowed outside, I was glad not to be lying in my tent a day’s walk from any civilisation.

Now all I had to do was hike back down the valley, which would take two days at a leisurely pace. I trudged off in the snow, a little further down I passed through autumnal colours and a few hours later I would have arrived in the green gorge in summer if it hadn’t rained: the rain was anything but tropically hot. And then the long bus ride back to Kathmandu, luckily it wasn’t so crowded this time. Now I am sitting in the smog of Kathmandu instead of fresh mountain air, preparing for the next trek to Mount Everest.

Conclusion: This is not without reason one of the most popular treks in Nepal. It offers impressive views (you should definitely visit both Tsergo Ri and Langshisa Kharka) and a varied route. Far more impressive, however, are the Everest region and Annapurna Basecamp.