After half a year on the Southeast Asian banana pancake trail, I’m off to China: from Bali I first fly to Kuala Lumpur. Malaysia is currently mired in thick smog as farmers in Sumatra burn down their harvested fields. I continue to Macau – actually I wanted to go directly to Beijing, but that would have cost a lot more (1400 instead of 200 euros). I spend the rest of the first night in the airport…

I finally find a cheap hotel in Macau and the language problems start: They simply ignore the fact that I don’t understand Cantonese. Somehow it works out though. The hotel is almost the biggest attraction in the city: a bit run-down, with tiny wooden compartments, an old Chinese man shuffles through the corridor in his underwear and I feel like I’ve been transported back a century. The city itself could be somewhere in Portugal, from the 16th century until 1999 it was a Portuguese colony. Similar to Hong Kong, Macau is now part of China, but with autonomous status: for example, it has its own currency and I don’t need a visa. 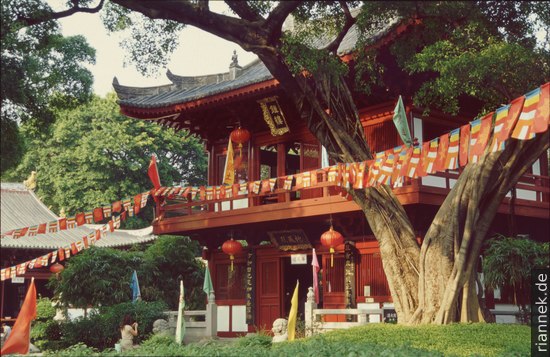 Finally in mainland China, I used the stop in Guangzhou (Canton) to visit a 2000-year-old royal tomb excavated here. The dead body was covered by a dress of jade plates, as it was believed that jade prevents the corpse from decaying. But this did not work, even from the bones there is almost only dust left. Apart from that, there are many precious grave goods and also some musicians, cooks and concubines had been buried with him so that they could also serve him in the afterlife.