Trekking in the Cordillera Blanca in Peru: In 10 days around Alpamayo and its beautiful neighbours

The Cordillera Blanca is a mountain range full of fantastically beautiful mountains made of granite and ice. Nowhere else in the Andes are the 5,000 and 6,000-metre peaks so close together, and at the same time it is the most glaciated region in the tropics. However, if you compare the glaciers with the map or a 10-year-old photograph, the picture looks pretty sad: The question arises how long the White Cordillera will be white at all…

Why there are no active volcanoes here in northern Peru, despite subduction of the Nazca plate, is an interesting story, by the way; the reason for which lies thousands of kilometres away in the middle of the Pacific: This is a section in my book about orogenesis…

Among all the beauties, Alpamayo is the most famous because it was voted the most beautiful mountain in the world by someone at some point. A hike took me around this peak and its neighbours in 9 days.

The first day takes me from the village of Cashapampa more or less along the detachment fault of the mountain range. Rolling fields and villages high above the valley of the Rio Santa, but below a high escarpment behind which the mountains hide.

On the second day I have to go up this endless steep slope and because of the weight of my backpack I ask for a donkey. “Only the backpack?” I am asked back, and so I have a porter instead. We start hiking at dawn and arrive at our destination, a lake below Nevado Santa Cruz Norte, at 10 am. Much too early to put up the tent, so I walk the next stage right away. Meanwhile, the mountains are hidden in black clouds.

Soon I arrive at the Alpamayo Base Camp (north side), from which this mountain is not visible, however, because of a 5000 m high rocky ridge. As soon as the weather is finally better, I climb this ridge. At the top there is some easy climbing, which I overcome with a bit of searching. Almost everywhere is blue sky, only Alpamayo, which should show its best side from here, a perfect pyramid of ice, is hiding in dense clouds! I continue to the moraine camp, where a group of climbers is camped for the ascent of Quitaraju. Then it starts snowing again, only this time it doesn’t stop straight away and with a bad premonition I make my way back. Arriving at the climbing spot, there is already about 3 cm of wet snow on the stone slabs, which are now as slippery as soft soap. How I got back down there is a mystery to me. As I continue my descent, it is already getting dark, all I see in the light of the headlamp is a white wall of snowflakes. The next morning the weather is as good as I had wished for, but I have lost all desire for the original plan to try it a second time in case of doubt. Instead, I climb a bit on the opposite side and get a usable photo of Alpamayo after all.

I continue over a pass towards the 6000-metre Pucajirca, the high jagged northeast corner of the Cordillera Blanca. The north summit is made of steep limestone, the contact with granite can be seen in the flank of Pucajirca Central. Over another pass and past a pretty lake, I reach the remote village of Jancapampa on the other side of the Pucajirca. 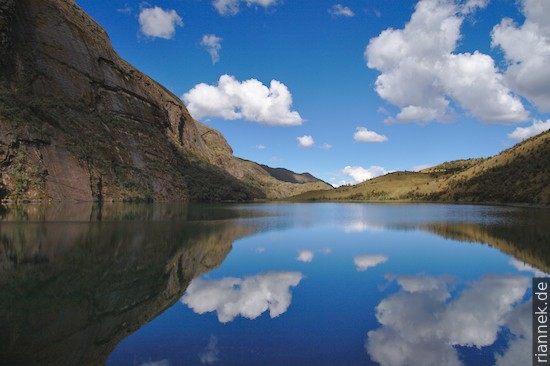 A few passes later, at sunrise, I cross Alto de Pucaraju, one of the most beautiful passes of the trek. From Huascaran to Chacraraju, Piramide, Paron and Taulliraju, I have a long series of spectacular mountains right in front of me. In between, Punta Union, the next pass: at this one I meet the Santa Cruz Trek, next to the Inca Trail near Cuzco the most popular trek in Peru.

A metre-wide path with stone slabs and steps leads up to it, so it is hard to miss. While I enjoy the view on this pass and eat lunch, an ant trail of gringos comes crawling up. Down in the valley is a real tent city and I watch a tired group being ferried up a small climb on a packhorse. To avoid the hustle and bustle, I turn into a side valley to the southern Alpamayo Basecamp. A little above there is a beautiful glacial lake, but the best thing here is the view of Artesonraju, which deserves the apple of beauty just as much as Alpamayo. On the last day, I just march down the Santa Cruz valley, relatively boring because there is almost nothing to see of the mountains…