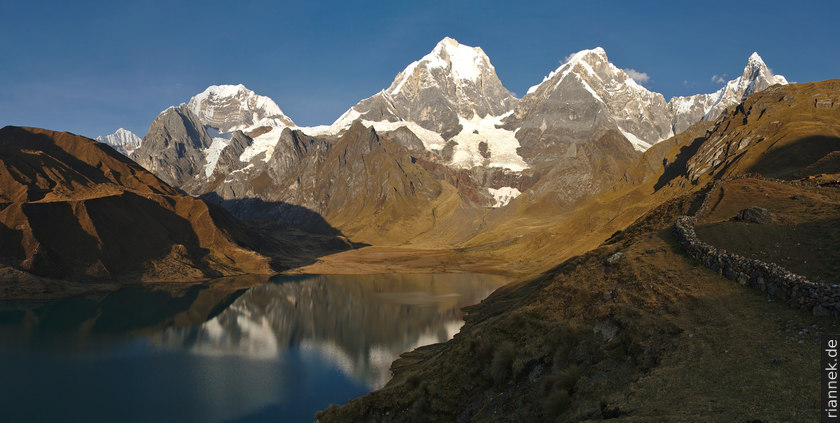 Remote and less known: South of the Cordillera Blanca, the Andes continue in the Cordillera Huayhuash (s.a. my book The Formation of Mountains). A spectacular mountain range of white jagged ice peaks, including Yerupaja, the second highest in Peru. All around, a series of blue, green, turquoise lakes reflecting the mountains.

But remote and unknown does not mean loneliness. On the contrary, hikers and donkey caravans cavort on the Huayhuash trek and the villages, which often consist of only 3 mud huts, charge tolls or camping fees. Most mornings, an inspector passes by, wearing a wide-brimmed hat and carrying a big old radio in front of him, antenna ahead, blaring music or football…

In 10 days I hike around the mountain range; alone, without guide or donkey, almost continuously at an elevation of 4000 to 5000 m. The starting point is Llamac, a daily bus leaves Huaraz at 5am. In the midday heat, I drag my backpack over the first pass, which brings me to the first lake, Laguna Jahuacocha. Above it, the double peak Jirishanca rises like a swallowtail. I continue over the Punta Rondoy, a pass with great views. In the north of the mountain range, wildly folded limestones dominate, as they do at the next pass that takes me to Laguna Mitucocha, on the back side of Jirishanca.

The highest mountains in the area tower above the next lake, Carhuacocha. I camp with a stunning panorama on the moraine at the end of the lake. From the ascent to the next pass, I look back at three differently coloured glacial lakes: turquoise, blue and white, because the lowest one is filled to the brim with ice, which regularly crashes down from the glacier hanging above it. However, thick clouds are gathering, and I don’t see much for the next two days.

A high pass with good views brings me back to the west side. I take a running start and walk over the highest and perhaps most beautiful pass, Paso San Antonio, on the same day and enjoy the view of even more lagoons and the highest peaks. On the other side, I slide down the steep slope and have to be careful not to look at the mountains but on the path.

A long descent follows to the village of Huayllapa, the only place on the trek where food can be bought. Shortly before the end, there are only 2 more passes to Laguna Jahuacocha, completing the circle. Here I am offered trout with potatoes, so in the evening I sit in one of the tiny, smoky huts with a thatched roof, crammed with wool, drinks (for the gringos) and wood. The señora is roasting another fish for her son on the wood fire….

On the last day, I only have to walk to Llamac, where the bus to Huaraz leaves at 12 o’clock.