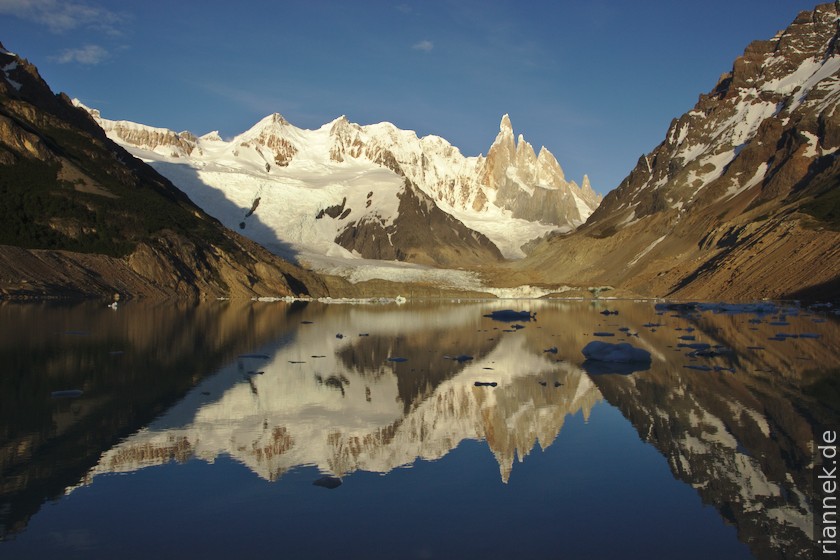 Images of the granite peaks of Cerro Torre and Fitz Roy are surely on every mountain lover’s mind. It doesn’t have to be the summit, as only a few people reach the top of either mountain. But even the view from below is a dream (cf. my book The Formation of Mountains). The best viewpoints can even be reached as a day hike from El Chalten, but it is of course nicer to pack your tent and provisions for a few days in your rucksack and hike up view after view. And also to wait a day or two for better weather … 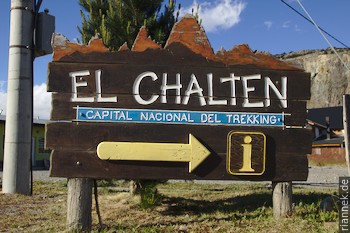 First I try my luck with the lookout mountain Loma del Pliegue Tumbado, from which on a good day you have an overview of both mountains and the Laguna Torre below. But I see mostly mountains of clouds … In the afternoon I hike to Laguna Torre, where of course there is nothing more to see, but when mountaineers wait here for weeks for good weather, I can hardly expect anything else, accordingly I have extra food and a good book with me. Two days later I catch the perfect cloudless sunrise. No wind, the mountain reflected in the lake, in which small icebergs swim. And what a mountain, this granite needle decorated with ice, an incredible sight! The stories of the doubted first ascent, the “compressor route” and the nails removed again by purists are well known, at this moment I don’t think about it, I just take in the beauty of the mountain. With my eyes and with my camera.

Now I have observed several times how people hold their iPad in front of their head to take a photo. Seems to be a new trend! With both hands, as if they wanted to drive the internet up the mountain. Wifi, however, is not yet available at Patagonia’s glacial lakes, as far as I know …

I continue relatively flat along the base of Fitz Roy to Camp Poincenot. In the afternoon I sit at the surprisingly scarcely visited Laguna Sucia, turquoise blue water full of mini icebergs, behind which Fitz Roy towers up into the perfectly blue sky. Avalanches from the hanging glacier regularly rush into the lake.

The most famous view of the mountain, however, is from the Laguna de los Tres a little higher up, where I am just in time for the next sunrise. However, sunrise is cancelled due to the clouds, it looks like a grey day. The lake is still frozen, a completely different sight from the photos I have seen so far. Later, the clouds clear, and I climb up to the lake a second time, but unfortunately the summit remains shrouded. Now I hike to the north side of the mountain and pitch my tent at the Piedra del Fraile.

In the evening, I storm up to the Paso del Cuadrado, from where there is a great view of the north face of the mountain and of the glaciers at Torre Piergiorgio. That was more than 2000 metres of altitude in one day, I sleep so soundly that I hardly notice the oncoming storm.

In the morning, the weather is really like its reputation, stormy and wet. Instead of giving Laguna de los Tres another chance on the way back, I walk to the road and hitchhike back to El Chalten.

After a dry night in a real bed, I finally give Laguna de los Tres two more chances and actually catch a perfect sunrise. In the meantime, the ice has partially dissolved into picturesque ice floes, with Fitz Roy glowing orange above. A few hours later, as I walk back to the village, it has disappeared into the clouds again.

The day before it had stormed heavily, leaning on the poles I crawled across the terminal moraine at a 45° angle, feeling like an insect that has lost two legs and doesn’t quite know how to move with four. Every now and then I hold the camera against the wind to take a photo of the glowing red cloud in which the mountain hides, but the pictures are hopelessly blurred.

Incidentally, Fitz Roy was the captain of the Beagle, by which Charles Darwin had himself sailed along the coast of South America. The expedition almost reached Lago Argentino, the large lake near El Calafate, by pulling a boat up the river. However, they did not reach the similarly large Lago Viedma and thus did not come within sight of the mountain. Originally, the mountain was called El Chalten, the smoking one, which is now the name of the village below. It was only founded in 1985 to forestall any claims in the border disputes with Chile. The village is growing rapidly, there is construction everywhere and probably at least one new hostel opens every year. The road bridges in the area and the asphalt on the road are also only 10 years old! Most of the inhabitants are only here in the summer, though.

Last but not least, I take a tour to the Viedma glacier, one of the largest of the many glacier tongues coming down from the ice sheet. We take a boat across Lago Viedma (which is about the size of Lake Constance), then go for a mini-walk on the glacier. I found the tour a bit disappointing, though.

Another adventure is the notoriously empty ATM in El Chalten. When it was finally filled up after a being completely empty for few days, a long queue formed in no time: I had to wait almost two hours.