Since I don’t have any recent photos to show, here is a picture of a rock sample that has been lying around in my room for a long time. It is one of my favourite samples because I can torture every geoscientist who visits me with the question of what he sees here. Two different rocks, right, and the upper one with red garnet in green omphacite is unquestionably eclogite. The brown colour of the lower rock is only the weathered surface, on which, however, the pink garnet and the green chromium diopside stand out clearly. Unweathered on the other surfaces, the rock looks quite black. The rusty brown is the typical weathering colour of olivine and the rock is a garnet peridotite, i.e. a piece of the Earth’s mantle. 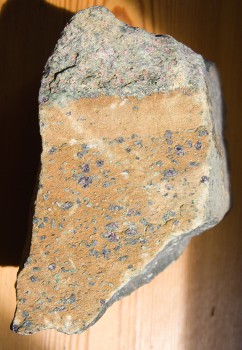 And this is exactly the reason why I like to ask the question so much: this is roughly how (at least sometimes) the Mohorovičić discontinuity, the boundary between crust and mantle, may look. Eclogite is a high-pressure metamorphic rock that forms from basalt at great depths. This happens mainly during the subduction of oceanic crust. But if the continental crust is thickened by mountain building, its lowermost part can also be transformed into eclogite.

The Moho – hardly any geologists attempt to pronounce its full name – was discovered in 1910 by the Croatian geophysicist Andrija Mohorovičić through the evaluation of earthquake waves. Since the Earth’s crust and mantle are made of different rocks of different densities, earthquake waves travel at different speeds in them, and they are diffracted at the Moho. However, the position of the Moho is not always clear-cut, for example clumps of mantle and crustal rocks can get mixed up. Another aspect casts a certain shadow on my sample, because not all crustal rocks have a low density – and especially not eclogite. In that case, the seismologists’ Moho would not have matched the mineralogists’ Moho.

In fact, it is quite likely that my sample was never at the base of the crust like that. It comes from the Åheim olivine mine in Norway, which lies in the so-called ultra-high pressure province north of the Nordfjord. The whole region consists of rocks in which ultra-high pressure minerals have been found that prove deep subduction in a subduction zone: for example, coesite, which occurs in the eclogites in the form of tiny inclusions in garnet. The most common rocks in the province are gneisses, continental crust, which have also been subducted to a depth of at least 140 km, as evidenced by microscopic diamonds. Tectonic movements have incorporated countless lumps of eclogite and peridotite into these gneisses, with diameters ranging from one metre to a few kilometres. And further tectonic movements followed on the long way back to the surface (as explained in my book The Formation of Mountains). No idea where along the way the two rocks of my sample came together.