At perhaps the most spectacular waterfalls on earth (Argentina/Brazil) 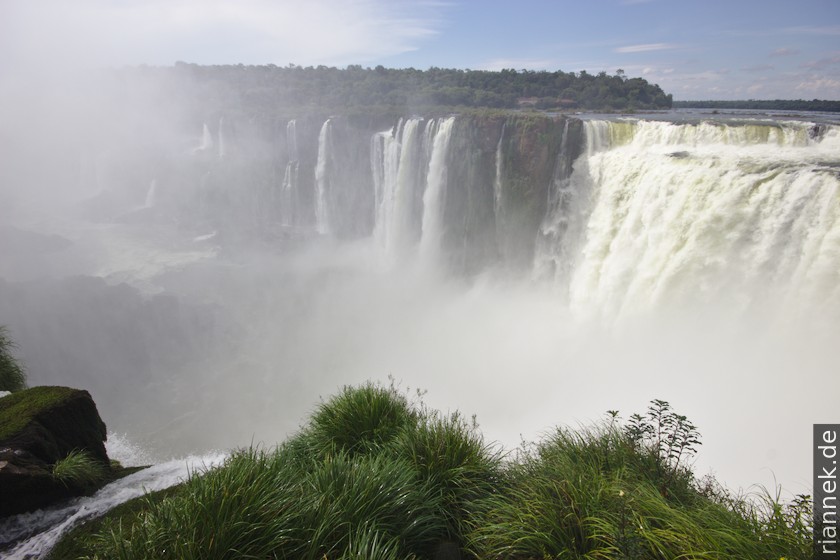 An entire landscape of thundering white curtains of water plunging on all sides into an 80-metre-deep gorge of black basalt. A lush rainforest clings to the rocks of the islands that lie between the 20 large and about 200 smaller waterfalls. The spray creates a humid, almost tropical climate in a region that would normally be hot and dry. Few waterfalls on earth can even come close to comparing with this natural spectacle on the border between Argentina and Brazil.

If you want to admire this spectacle, however, don’t expect to be alone there. At the viewpoints, so many tourists jostle for a selfie in front of the best spots that you have to queue for a long time for a brief moment at the railing. Especially on the Brazilian side, the platforms are small and bursting at the seams; on the Argentinean side, it gets a little more spread out.

The town of Puerto de Iguazu (Argentina) lies a few kilometres downstream at the mouth of the Iguazu into the Paraná (which forms the border to Paraguay). A few kilometres up the Paraná from here is the Brazilian town of Foz do Iguaçu and on the other bank is the town of Ciudad del Este in Paraguay.

It is definitely worth visiting both sides of the falls. From Puerto Iguazu there is a bus every 20 min to the Argentine Visitor Centre and every hour a bus across the border to the Brazilian entrance. On both sides, the light is better in the morning — as far as the sun can get through the clouds at all.

For the Argentinian side, you should plan a whole day. Unfortunately, you have to wait repeatedly a long time for the slow train because the footpaths are closed (supposedly because of the pumas). There are two circular routes from the middle station. The lower one is particularly beautiful, it leads at an intermediate elevation through the lower part of the gorge, with constantly changing views of waterfalls on both sides. If you are lucky, you can also cross from this path to the island of San Martin, situated between large falls, from the upper end of which there must be a magnificent view; in our case, the island was closed. The completely flat upper circular trail leads from the middle station on footbridges along the edge from one fall to the next. Another train ride brings us to a long footbridge over which we reach the largest and most powerful waterfall, the Garganta del Diablo. The gorge here is filled with white spray and the waterfall seems to be falling into a cloud. It is at the top of the gorge and forms the border between the two countries.

Half a day is enough for the Brazilian side, as there is only one path here. It first leads along the edge of the gorge, offering an overview of the waterfalls on the other side. Finally, here too, you reach a footbridge that leads over a terrace at medium height, located between two steps of waterfalls. If you get a front-row spot at its end, you have a gigantic view in all directions — including of the Garganta do Diablo (as the largest one is called in Portuguese). A lift takes you up to the street with the buses.

Incidentally, the basalt flows into which the Iguazu cuts also have an interesting history (cf. my book The Formation of Mountains). They belong to the Paraná-Etendeka flood basalts, which today are divided in two by the Atlantic Ocean. The Paraná area includes large parts of southern Brazil, Uruguay, northeastern Argentina and southwestern Paraguay. The smaller Etendeka is located in present-day Namibia. In the Cretaceous period, about 127 Ma ago, when one mighty lava flow flowed over the next in a geologically short time here, both continents were still part of the large continent Gondwana. According to classical theory, such flood lavas are formed when hot material rises in the Earth’s mantle as a so-called mantle plume — and its mushroom-shaped “head” arrives at shallow depths, forming large quantities of basalt magmas. Along long fissures, veritable lava curtains shot upwards, individual lava streams flowed for hundreds of kilometres. Only later did normal hotspot volcanism (comparable to Hawaii) set in, fuelling the volcanic island of Tristan da Cunha in the South Atlantic. The stretching of the crust caused by the mantle plume may have been partly responsible for the disintegration of Gondwana and the opening of the South Atlantic.

In these flood lavas of the Paraná Plateau, the huge amethyst druses were later formed in bubbles, which can be found in many museums and mineral shops all over the world (almost all of them come from Brazil or Uruguay).