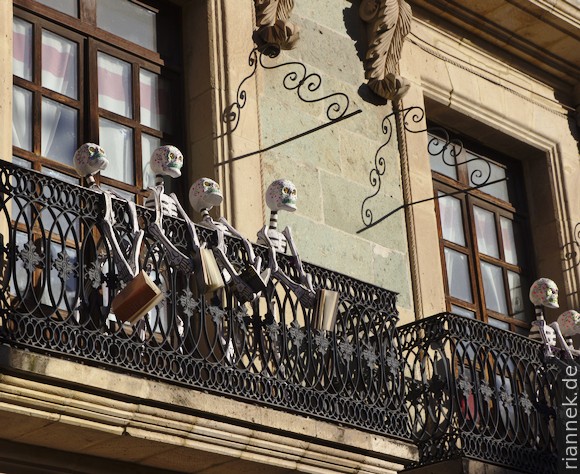 The city of Oaxaca de Juárez lies in a wide valley. There are lots of colonial houses, ornate churches and good museums to see. Unfortunately, in the very interesting Museum of Cultures of Oaxaca, housed in a former monastery, many showcases were empty and highlights like a jade-covered skull from a Mixtec tomb were missing, without any sign. A really very nice collection of pre-Hispanic art from all over Mexico is on display at the Museo Rufino Tamayo (compiled and donated by the modern painter, of whom no picture hangs here).

Another highlight is the delicious regional food. Every now and then, after walks through the city, I stop at a market hall whose food stalls offer delicacies such as mole, tamales, tlayudas and tasajo. 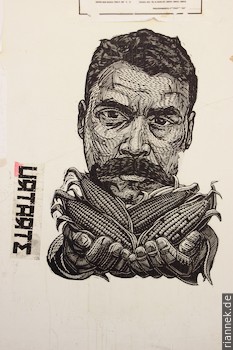 Social protests have a tradition in Oaxaca. 10 years ago, protests by teachers and general discontent led to a broad social movement that was put down with brutal force by police and paramilitaries. The teachers have been fighting almost without a break ever since. Even now, the Zócalo (the city’s main square) is densely packed with tents and the façade of the government palace is covered with banners.

Nearby, on the other side of the cathedral, law student lectures are taking place in the street between protest signs. If I understand it correctly, it’s about a power struggle for the institute’s leadership, against the authoritarian leadership and for better study conditions. Exactly one year ago, there was a clash in this conflict: the institute building, located a few steps from the cathedral in the pedestrian zone, burnt out in the process. A strange contrast to the cafés frequented by tourists in the neighbourhood.

Monte Alban was the most important city in Zacatecas. The ruins are beautifully situated on a flat ridge in the middle of the high valley of Oaxaca. Sitting on the north platform, with a view over the whole site and the mountains on either side, I feel like I’m sitting on the quarterdeck of an oversized ship moored in the wide valley.

Like almost all tourists, I make a day trip to Mitla and Hierve El Agua. My first stop is Yagul, rather small ruins mainly of the Mixtecs (i.e. less old than Monte Alban, but the Zapotecs have also left traces) on a hill 1.5 km off the main road. The main things to see are the remains of a labyrinthine palace and, once again, a ball court (supposedly the second largest in Central America after Chichén Itzá, but it seems average to me). The view from the rocky outcrop surrounded by vultures, which once served as a fortress, is beautiful.

The wonderful Mixtec ruins in Mitla are known for their “mosaics”: Stones protruding more or less far from the façades create diverse geometric patterns.

Hierve El Agua can be reached from Mitla via a winding track that crosses the ridge to the southwest (pickups drive here irregularly) or in a wide detour around the mountain. Here you will find wonderful sinter terraces of white limestone.

Contrary to the name, the mineral water bubbling from several springs does not boil, but is on the contrary quite cool.

There are two large pools (comparable to the pools in Pamukkale, only much larger and deeper) directly above a high travertine rock and with a beautiful view over the valley. Bathing with a view. As I read later, the two large pools are unfortunately not really natural…

A little further on, there are smaller springs above a particularly spectacular travertine rock called the “petrified waterfall”. It looks like an organ made of stalactites, the kind you usually see underground in caves.

On the way back, I stop (almost back in Oaxaca) in El Tule to admire the huge Mexican bald cypress next to the village church. It has the thickest trunk in the world! However, I suspect that it is several specimens that have grown together. I don’t know if botanists have ever tested this.

From Cancun to Mexico City
Chiapas
Puebla and Cholula