One of Mexico’s active volcanoes is El Chichón in Chiapas, also called Chichonal. Unlike the large stratovolcanoes in the highlands of central Mexico, it is low (1150 m) and from a distance looks like a ridge rather than a cone. The more rewarding is the view into the crater with a green, highly acidic lake. Next to a bay, steaming fumaroles; the water of the bay is light green and from here a light green streak, constantly changing its shape, billows into the otherwise dark green lake.

What is actually one of the most interesting natural sights in the country is not in the guidebooks and is visited by few tourists (travel information and GPS waypoints follow below). This is certainly due to the fact that the volcano is far away from the tourist hotspots of Chiapas and the journey is complicated and lengthy. The starting point is the mountain village of Chapultenango. In the valley lies Ixtacomitán, actually on the most direct but winding route between Tuxtla and Villahermosa. But only one bus stops here daily, most buses bypass the area in a wide arc.

I start early noon in Palenque with a comfortable bus to Villahermosa (2 h 45). There I walk to the other bus terminal, where the local buses leave, and take a less comfortable bus to Pichucalco (2 h). From here a colectivo goes to Ixtacomitán (30 min), where again a pickup up to Chapultenango can be found (1 h). This is already full, and so I am hanging in the back in a crowd of people, my feet on the bumper, my hands on the metal bars of a sun roof. The sun has already set, and it is slowly getting dark. Fortunately, a little later I do have a seat, the winding road is quite long.

Unfortunately, there is no accommodation in Chapultenango. So I have to go to El Volcán, 7 km away, which is at the foot of the mountain and only consists of a few small houses. Here there is a hut with a few beds and space for camping. A mostly flat gravel road leads there, should not be a problem even in the dark? I ask for directions and everyone says it is too dangerous in the dark, but there are no pickups now, so what now? A helpful woman finds someone to drive me there on a motorbike. I am lucky, as soon as I have agreed on the price for the room with a deaf-mute, it starts to rain heavily.

About 3 h before sunrise I set off in the light of my headlamp (the climb takes 2-3 h). The path leads through a avenue lined by newly planted trees, crosses a stream and leads gently upwards over pastures. Again and again barbed wire fences with small gates. 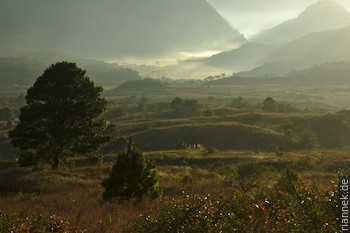 And then I get lost, in the dark I don’t even notice the turn-off (which I didn’t know about either) where the right path branches off to the right through a gate in the fence. I end up in a marshy meadow where my path runs off. Opposite I find another path, climb up onto a ridge and follow it upwards on a well-trodden path. After a while I am relatively high up on the south side of the volcano, but the path leads down again, towards a village whose lights are clearly visible in the dark. Towards the volcano, deep erosion gullies and dense scrub. The idea of being at the top at sunrise has thus failed grandiosely, the diversion costs me 2 hours. Because I can’t even find the same way back, in the dark the slopes seem insurmountable, steep and full of undergrowth (in the light it looks quite harmless later). So I take the path on the ridge in the other direction and meet the main path within sight of my hut at dawn.

My second attempt is more successful. I find the branch to the right and then the path is clear. It soon goes down into an erosion gully, up the stream bed for a while and out again on the other side. Now up the slope overgrown with bushes, reeds and orchids to the saddle between two hill-shaped peaks. Once there, I am amazed to see that only a few metres of altitude are missing. The hills on either side are the remains of an old crater rim, while in front of me, separated by a narrow plain, is a low tuff ring. A few minutes later I am at the rim, looking down on the lake in the crater.

It is interesting to compare aerial photos taken before the last eruption in 1982 (you can find them here): the tuff ring and its crater did not exist, but instead a large lava dome.

I prefer not to climb the small nose-shaped peak a little further to the right behind the gauging station; it is surrounded by decimetre-wide crevasses and gives the impression that it will soon fall.

The trail follows the crater rim a little to the left and then descends very steeply to the lake. Many mofettes can be seen on the shore (gas bubbles of mainly CO2 bubbling in the water). A little further up, fumaroles are steaming heavily with a distinct H2S smell, and beautiful small sulphur crystals grow at the holes. And at the aforementioned bay I encounter boiling hot springs. One of them bubbles like a miniature geyser a few cm high. In the bay, even the water of the lake boils in places.

As I read later, the lake is mainly fed by this hydrothermal water, which is highly saline and has an almost neutral pH. The lake’s acidic water is typical of volcanoes, which is due to the oxidation of sulphur.

Caution: Volcanic gases are harmful to health and will also attack a camera or similar. And the crater rim is prone to falling rocks.

On the way back, I walk to Chapultenango. Then another pickup to Ixtacomitán and a colectivo to Pichucalco, where I spend the night in a simple hotel. Early in the morning I take a bus, which takes me in 6 h over narrow winding roads to Tuxtla.

Waypoints:
El-Chichon-Wegpunkte.gpx
The file can be used with GPS devices or smartphones (e.g. the Android app Geo Tracker).

Bus from the North:

Bus from the South:

Tuxtla to Pichucalco: 6 h, 4 busses daily
From there: See above.
(Daily also 1 direct bus to Ixtacomitán)

Small hut (camping possible) in Volcán. Bring your own food and water.
Simple hotels in Pichucalco. No accommodation in Chapultenango!