Between L’Hospitalet-pres-I’Andorre and Banyuls-sur-Mer, the HRP leads over Pic Carlit and Canigou and then over numerous hills to the Mediterranean Sea

On the last section of the Pyrenean Haute Route (Haute randonnée pyrénéenne, HPR), there are only a few real mountains. The trail gets easier and easier, which is offset by the increasing heat.

L’Hospitalet-pres-I’Andorre is not exactly a place with flair: infrastructure like the hydroelectric power station, the pass road and the railway line dominate the place. The shop is closed and the restaurant only serves drinks. But I urgently need provisions for the next few days. At the gîte I get a tip that there is a sandwich shop down the valley. I leave with a big bag full of pizzas, sandwiches, quiche and biscuits. So I can climb up to a small reservoir in the evening.

I pass a much larger reservoir the next day. With a low water level, it doesn’t look very pretty. All the better is the view from the small Etang des Fourats to the rugged Pic Carlit. A beautiful mountain that clearly towers above its surroundings. I sit here for a long time because the weather report has announced a thunderstorm, but it remains in the distance. So in the late afternoon I climb up through the steep gully more or less in a straight line to the summit.

The view from the top is worthwhile, especially because of the many lakes on the eastern side. I descend to these and, deviating from the HRP, walk in an arc from lake to lake. There are countless beautiful bivouac sites here, I decide on the Estany de les Dugues. It lies in a heath landscape with small granite humps, an interesting contrast to the pointed slate at Pic Carlit.

As I walk on early in the morning, a flood of day trippers comes towards me and the solitude is gone. Now I have to hike for almost a whole day through hilly uplands to get to the next higher ridge. For a long time it’s through coniferous forest, then over asphalted roads. Not the most exciting day of the trek … At least I can fill my rucksack with provisions in Bolquère and in Eyne I treat myself to a second lunch in the restaurant. Just as I am about to pay, a thunderstorm starts and I stay a few more hours.

Later, as I climb into the Vallée d’Eyne, it pours again. Nevertheless, some tents accumulate in the upper part of the valley.

A hike over a rather long ridge follows. After a few peaks, the route descends a little on the Spanish side, where I arrive so early that I decide to add another stage. So I continue, up the ridge again, which is more like a wide plateau here. Of course, another thunderstorm hits me, but this time I only get 10 minutes of hail. 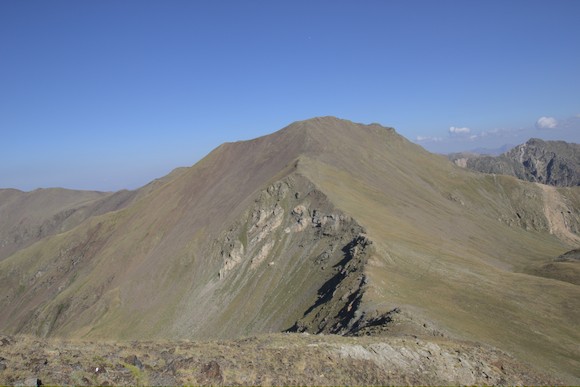 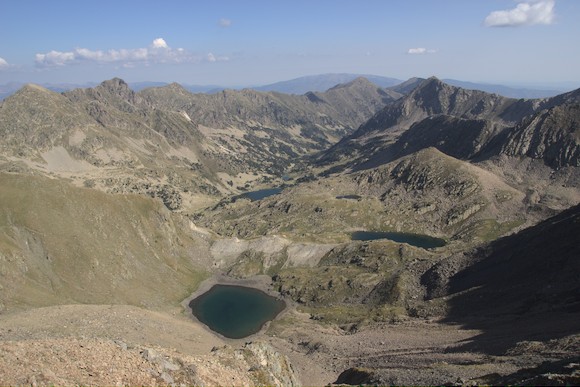 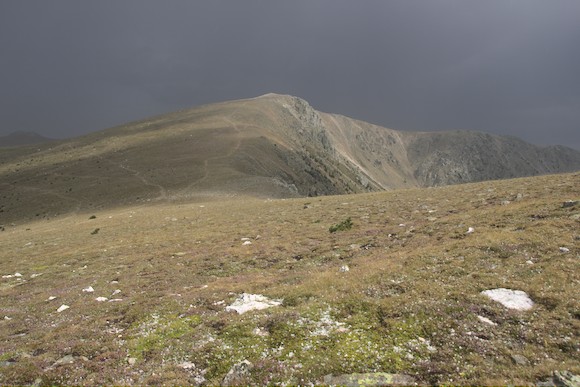 Later, I walk along a long hydrothermal quartz vein: jagged rock formations stretch across the ridge Les Esquerdes de Rotjà, which makes me think of a dragon’s tail. 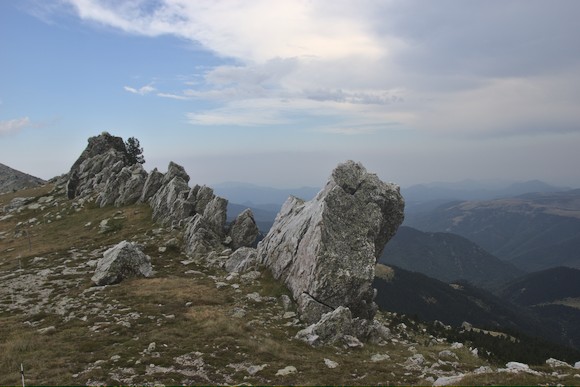 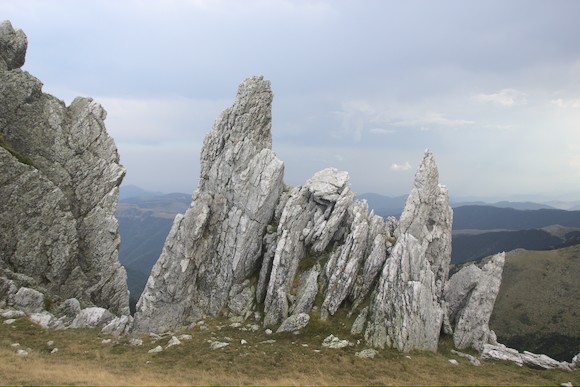 I’m starting to get tired, but there is no water far and wide. So I trudge on until, just before the Refuge de Mariailles, I finally come to a stream and pitch my tent.

The next morning I climb Canigou, the easternmost real mountain in the Pyrenees. It has a rocky basin on the south and north side and looks quite rugged in the corresponding view axes. From all other sides it is more like a big round hump. The HPR leads up through the steep Canigou cheminé to the summit. Theoretically, the Mediterranean Sea would be visible from the top, but instead I am looking at a sea of clouds. On the north side, I descend again on an easy path and then head east at a medium elevation. When I reach the tiny Cabane du Punatell, I am so tired that I stay. There is no room for a tent, so I move into the cabin for the first time. A big mistake! As soon as it is dark, the Catalan, who is lying below in the bunk bed, starts swearing and shining his headlamp around. A little later something crawls over my hand, I strike: a bedbug. Without further ado, I flee outside and lie down in my sleeping bag on the table of the picnic area. At least the sky is now cloudless and full of stars. The Catalan packs his backpack and hikes on …

From Canigou to the beach, it’s a few days of ups and downs over wooded hills, with the HRP now mostly following the GR10. The scenery is no longer so impressive. My main concern now is to finish the trek and arrive at the sea.

Down to Arles-sur-Tech, the path leads along the remains of a cable car that once transported iron ore from a mine to the valley. For some culture, I make a short detour to a dolmen and in Arles I take a look at the abbey. The daily thunderstorm brings some cooling, but it remains extremely humid and on the way over the next pass I feel like in a steaming tropical rainforest. The path makes an unnecessary huge detour with additional ascents and descents until I finally arrive at my destination for the day: Montalba d’Amélie. Here there is a little church, an inhabited and a dilapidated house and enough space to bivouac.

The next day I climb a small peak called Roc de Frausa, then I take a very long siesta at an old well house. In the afternoon I am already in Las Illas, where there is an official bivouac site with shower and toilet at the edge of the village. For a change, I treat myself to a menu in the restaurant in the evening.

The next day, it’s mostly over dusty dirt roads. The lower I get, the more cork oaks I see, with the lower metre of their trunks peeled off. Shortly before Le Perthus, I pass the remains of a Roman monument and the baroque Fort de Bellegarde.

At 280 m, Le Perthus is the lowest pass in the Pyrenees, and the motorway and railway line run here accordingly. The strange place consists almost entirely of a lively street full of supermarkets, restaurants and junk shops, with the border running along the pavement. All the big shops are on the Spanish side of the street and the they specialise in French bargain hunters filling shopping trolleys with booze, cigarettes and chocolate. In between, like aliens, some hikers with big backpacks, looking for some provisions for the last little stretch.

Far above, at Col de l’Ouillat, the GR10 and HRP hikers gather for the last night on their respective treks. I set my alarm an hour earlier, at sunrise I am already sitting on the highest point of the day, Pic Neulos. Unfortunately it is extremely hazy, and there is a slight smell of forest fire. Both Canigou and the Mediterranean Sea can just be glimpsed. At least the sea is finally in sight. 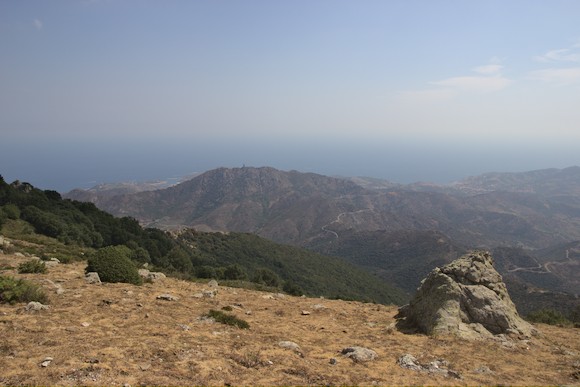 From hill to hill, it now tends to go downhill, through forest and across dry meadows, and the sea slowly becomes more visible and bluer. Then I pass through vineyards and finally I cross Banyuls-sur-Mer and reach the pebble beach in the afternoon of the 38th day. After an ice cream, I immediately jump into the water. However, the beach is much more crowded than I had expected.

As a contrast, I have 3 days left in Barcelona. The first thing I need is new shoes, the hiking boots (brand new at the beginning) are completely destroyed.