From Salardú to L’Hospitalet-pres-I’Andorre, the HRP runs through the farthest corner of Catalonia and through Andorra

The next section of the Pyrenean Haute Route (Haute randonnée pyrénéenne, HPR) leads through a relatively unknown but beautiful part of the Pyrenees, in a remote corner of Catalonia. The small principality of Andorra is then crossed in 1½ days. The loneliness is relative, though; in August you’re not alone here either. Besides, more and more HRP hikers are coming from the other direction now.

In Salardú, I get off late because the little shop doesn’t open until 9 — and I have to buy food for a week. As I climb, I can see the Romanesque churches in the valley and Pico de Aneto in the background. After a picnic at the Estanys Rosari de Baciver lakes, I scramble up a steep grassy slope to the Tuc de Marimanya, leaving the day-trippers behind. A landscape with many lakes and extensive block fields comes into view, and soon I am bouncing from block to block for quite a long time above the Estany d’Airoto. I cross another pass and bivouac at a small lake.

A descent over half overgrown paths takes me to the sleepy village of Alós d’Isil, followed by the ascent to the next pass, Col de la Cornella. Now I cross two more passes with views of several lakes. The Gallina lakes are particularly beautiful on the descent from Col de Calberante. At the lowest lake, I bivouac near the Refugi Enric Pujol tin hut. 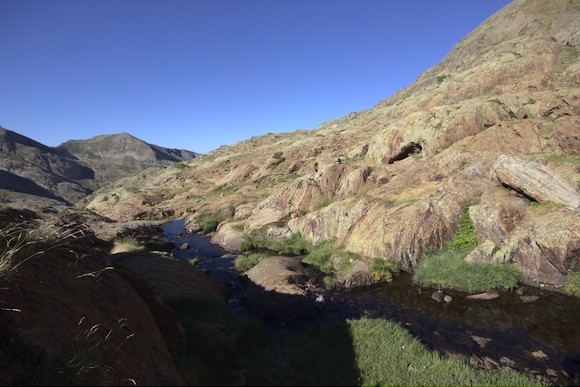 A day with two summits follows. Early in the morning I climb Mont Roig, with a great view of the Gallina Lakes, among others. 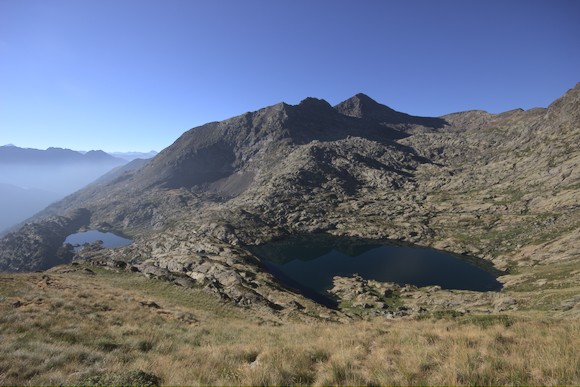 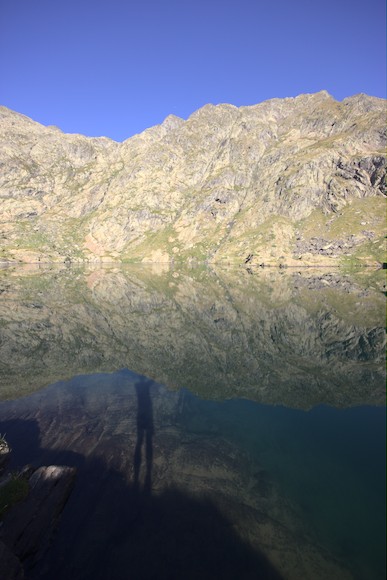 Then I take down the tent and hike down to the tiny village of Noarre. As I approach the next pass in the afternoon, a thunderstorm comes up. So I sprint as fast as possible up the 250 metres to the summit of the Pic de Certescan and back down again. I bivouac at the Estany de Certascan, which you can clearly see is dammed because of the brown stripe along the steep bank.

The next morning I come to the very pretty lake Estany Romedo de Dalt. That would have been a nicer bivouac spot … I take a long break, I am pretty tired today. Then I descend past many waterfalls. 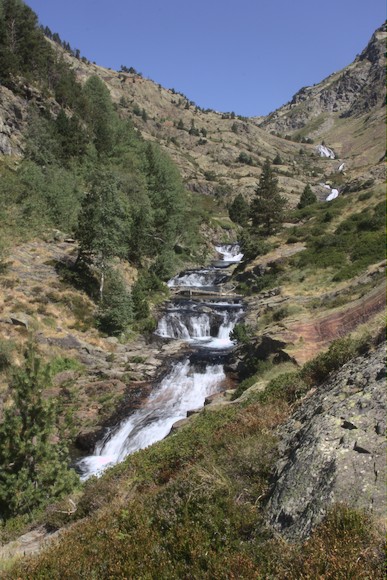 Shortly after I start after my lunch break at the lowest point, it starts to rain. Up to the Coll de Sellente I get a multiple change of heavy rain with thunder and lightning and breaks of rain with a few rays of sunshine. From the pass it is not far to the bright orange tin hut Refugi de Baborte, which I head for dripping wet. But unfortunately, it is already as full as a can of sardines. Fortunately, the rain stops a few minutes later, and I pitch my tent by the lake.

The next morning I hike through a flat high valley, Pla de Boet (a popular variant of the HRP via Arinsal in Andorra branches off here). Then over the Port de Boet for a few hours into France. As clouds are already gathering again, I hurry. After an early lunch break at the Etang de la Soucarrane, I set off for the next pass, the Port de Rat. Here I enter Andorra, a country I have never been to.

It is strange to arrive at the mountain station of a cable car after days in the wilderness and to have the choice between two restaurants. With a ravenous appetite, I fill my belly. Then I do another really nice round on the panoramic path through the Cirque de Tristaina. The three lakes look great in the evening light — and the bad weather actually did me the favour of staying behind the next mountain range. Actually, I would have liked to spend the night here, but the no-camping signs are hard to miss. So I descend a good bit further into the valley.

The next day leads over several passes and past lakes, crossing north-eastern Andorra. Most of the time I am only just above the tree line, but still close to the peaks. Shortly after the lunch break, another heavy thunderstorm starts at the Serra de Cabana Sorda pass. I hurriedly descended to the hut. The hail hurts my head so much that I stuff something under my hood, and my shoes fill with water. By the time I reach the hut, the worst is over, but I still shelter for an hour. Unfortunately there are only places to stand left …

To get warm again, I hike to the Juclar Lakes, where I arrive quite tired shortly before sunset (there is a nice bivouac site at the upper lake). Here the mountains are once again rugged and jagged.

Now it’s only a short climb to the Col de l’Albe, where I leave Andorra and re-enter France. The path over the pass is really beautiful with all the lakes. I especially like the view back to the Juclar Lakes, but also the Etangs de l’Albe on the other side. Then I head down to L’Hospitalet-pres-I’Andorre.

HRP part 5: The last mountains before the Mediterranean Sea