The next section on the Pyrenean Haute Route (Haute randonnée pyrénéenne, HPR) leads through an impressive mountain landscape with mountains like Pico de Aneto and numerous mountain lakes, e.g. in the Aigüestortes National Park.

But first it starts with a boring and sweaty climb up a gravel road. With the midday heat, the overnight stay at the Barroude lakes takes its revenge … On the other side of the pass I hike towards Posets, the second highest mountain in the Pyrenees. I spend the night at a campsite, a good opportunity to take a shower and charge the batteries.

A long day with many passes follows. In the morning I climb up to Port d’Aygues Portes on more or less clear trails, on the other side I descent to the clouds. At this altitude I traverse the slope for a while, passing a lake and several gallery entrances. Then up to a reservoir and on to the pretty Lac des Isclots. 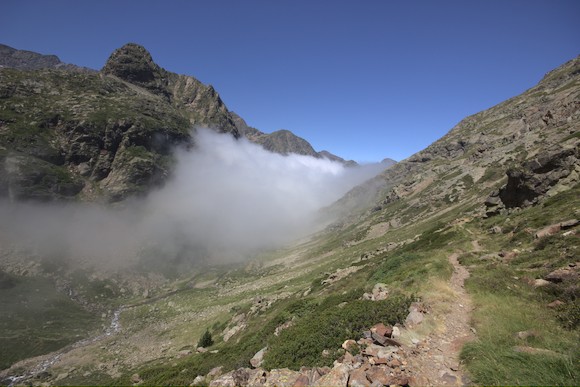 The route continues over blocks and a remnant of a glacier. By the time I reach the Col des Gourgs-Blancs (2877 m), it is early evening. Now I have to cross another pass, a small mountain and then descend to Lac du Portillon, surrounded by 3000m peaks (unfortunately only a reservoir).

The next day begins with the highest pass of the HRP, the Col Inférieur de Literole (2983 m). The descent on the other side is considered the most difficult part of the HRP, an unpleasant steep slope that crumbles underfoot. A little later, another pass follows above Lago de Literole. Here I leave my backpack and make a detour to the Pic Perdiguère (3222 m). This is the highest peak around Lac du Portillon, and the climb up its backside is fairly easy.

I then descend through a pretty high valley into the upper end of the valley of Benasque. I continue up to the Refugio de la Renclusa, from where I want to climb Pico de Aneto.

In the light of the headlamp, I climb to Portillon Superior, a pass in the ridge high above the hut. At sunrise I have a magnificent view, but with rather dark clouds over the summit. I decide to turn back, but a group comes up and they tell me that it’s not supposed to rain until the afternoon. So I continue, mostly hopping over blocks. Then the remains of the glacier: there is not much left, but real crampons instead of my spikes would have been more appropriate. By the time I reach the summit, it is in clouds and I can’t see too much. Most of the others have come via another route (over the pass right next to the hut and past a small lake). I take this one for the descent and am much faster on it. The smoothly polished granite slabs are like a highway compared to the block fields …

Back on the HRP, I come to the Forau de Aigualluts: here, a river falls in a waterfall into a gorge-like sinkhole and disappears underground. By the way, I have completed half of the HRP here. A little further up the valley I pitch my tent. At night there is a thunderstorm. 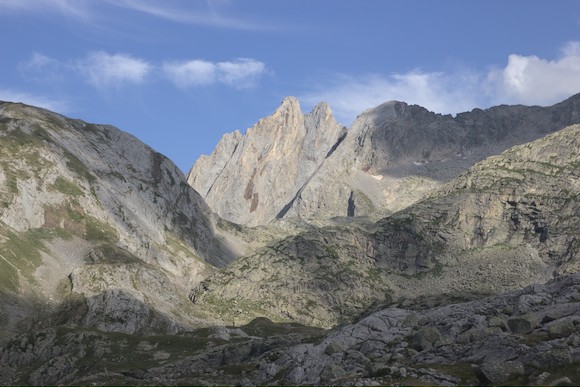 The next morning, the weather still looks undecided. Blue sky in the direction of the next pass, dark clouds in the other direction. When I reach a flat bowl of granite about 300 m below the pass, a cloud spills up from below. Suddenly the fog is so thick that I can’t even see the next cairn, let alone the two hikers who were just ahead of me. I take out my mobile phone for navigation, but by the time I have a GPS signal, it starts to pour and thunder. It happens so fast that I’m already wet by the time I’ve put the phone away and unpacked my rain gear. I crouch down in a crack between the rocks. Rain and hail pelt me. The mountains get white spots and where there was dry rock just a moment ago, there are suddenly countless waterfalls. Next to me, where before a trickle was flowing before, now a 10 m wide, raging river rushes. After 2 hours the thunderstorm finally stops, and I am freezing cold. I make a push, but don’t get far because the river is in the way. For the same reason, a retreat into the valley is impossible. So first I make a coffee and watch the level drop again.

When I climb back up, it starts to rain again. So I hurry, now I really want to get over the pass. I hurry from cairn to cairn and only realise at the top that I am on the wrong pass, on the wrong side of the Tuc de Mulleres lookout peak. At least it’s clearing up a bit now, which looks pretty good, of course. I don’t bother with the summit, I cross the slope over the boulders to get to the other side. Funnily enough, I find footprints in the fresh hail. The other two hikers must have made exactly the same mistake! Finally I am at the Col des Mulleres, the last high pass of the HRP. I still descend to the lakes and bivouac near a small tin hut.

The next day begins with fog and ends with fog. At least I sit in the sun at Lac de Rius at noon and spread out my wet clothes and especially my dripping mobile phone to dry.

But already at the neighbouring lake I trudge through fog. I was particularly looking forward to the view of one of the most beautiful lakes in the Pyrenees, Lac de Mar, from a small pass. All I see is fog. After a night on the shore, I climb up again at sunrise to at least have the view backlit.

More lakes and passes and good views follow. Here I am in the Spanish Aigüestortes National Park, where there are very many pretty lakes between rugged granite mountains. Then it’s down a long valley to Salardú, where I make myself comfortable in a guesthouse.