More than 2 m of pumice was deposited on the first day of the 79 AD eruption of Vesuvius. The weight caused roofs of buildings to collapse, but people died in the pyroclastic flows (surges) that came down the mountain towards the end of the eruption. A caldera formed during the eruption, and Mt. Somma remained as a remnant of the old cone. The building materials used in Pompeii were the grey Campanian ignimbrite (trachytic, fiamme can also be seen) and the yellow Neapolitan tuff, both products of eruptions of the Campi Flegrei. Interestingly, leucite phonolites from Orvieto (Umbria) were used for the millstones.

Continuous activity began in 1906, ending with a minor eruption in 1944. A possible new major eruption endangers the half million people living on the slopes of the volcano. The lavas of Vesuvius are very K-rich: leucite tephrites and leucite phonolites.

The Campi Flegrei caldera potentially endangers Naples: caldera-forming eruptions are the most violent eruptions and the Phlegraean caldera is known to be active. The fumaroles and mud pools of Solfatara bear witness to this, as does the movement experienced by the Serapeium of Pozzuoli: Holes from piddocks document a subsidence of 10 m and subsequent uplift. Between 1982 and 1984, this area rose so much that a new harbour quay had to be built. At the same time there were tremors, so an eruption was expected. But the system has calmed down again for the time being.

The volcanic island of Stromboli is the type locality of the Strombolian eruption, in which lava fragments are ejected from the vent on ballistic paths. However, recent activity has once again shown that even this volcano is not entirely predictable. We visit impact funnels of half-metre bombs from an explosion in April; in December a landslide on Sciara del Fuoco had triggered a tsunami that destroyed houses on the shore. While we were there, there was only the quiet effusion of a small lava flow.

The islands of Panarea are dacitic lava domes, at Basiluzzo it shows spectacular flow patterns, typical of highly viscous lavas. The movement is concentrated at planes where gas bubbles accumulate, with rather rigid slabs between. Ramp structures can form as a result of cooling at the front of the flow. Conglomerates were deposited at high sea level approx. 125,000 years ago; they consist of “pebbles” up to metres in size.

In the north of Lipari there are beautiful obsidian flows (8th century AD), unfortunately the pumice around them is mined. The older obsidian flows further south were mined and made into blades in the Neolithic. South Lipari consists of several rhyolite domes. A special feature in Lipari is a garnet-cordierite andesite, the aluminium excess probably formed by assimilation of mudstone. There are also hornfels xenoliths with garnet, cordierite, spinel and silimanite.

Salina consists mainly of the beautiful cone of the andesitic Porri volcano and the F. della Felci (basalt to andesite). The eastern flank of Felci shows thick black and red deposits of strombolian activity, partly also tuffs of Porri are preserved, which partly flowed down the slope as concrete-like (cold) mud flows. The phreatomagmatic Polara crater (hornblende dacite) in the north of the island is the youngest crater on Salina.

The Fossa of Vulcano has had a variety of eruptive forms throughout history: an obsidian flow, fine-grained tuffs and, of course, Vulcanian eruptions, which are particularly explosive due to water vapour explosions in an aquifer. Typical are the andesitic breadcrust bombs: the quenched crust ruptured again as the interior expanded due to progressive degassing. Fumarole activity is relatively weak at present. The density of the clouds is not an indication of the strength of the fumaroles, as this is mainly related to the humidity of the surrounding air. At temperatures below 120°C, beautiful sulphur crystals form, ammonium chloride (white, soapy) and sassolin (boric acid) are also deposited.

The basaltic pillow lavas of Acicastello (north of Catania) formed by a lava flow of early Etna that flowed into the Gulf. Hyaloclastites consist of fragments of quenched lava. Basaltic glass rapidly begins to alter and recrystallise (palagonitisation) and turns brown. Zeolites (white) form in bubbles.

Voluminous aa flows are typical for Etna. The lava flows and cones that formed during the 2001/2002 eruptions are spectacular. 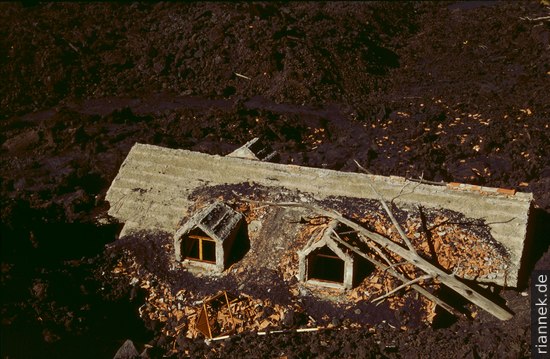