The GR 131 hiking trail on La Palma combines the Ruta de los Volcanes with the Ruta de la Cresteria for a four-day hike, an island crossing that is scenically and geologically spectacular (Canary Islands, Spain)

The GR 131 hiking trail on La Palma combines the Ruta de los Volcanes with the Ruta de la Cresteria to form a four-day hike: an island crossing that is not only scenically spectacular but also geologically exciting (cf. my book The Formation of Mountains). The first part leads to the volcanic craters in the south of the island, the second follows the rim of the Caldera de Taburiente. If you want to walk the whole distance, however, you have to bring a warm sleeping bag and be prepared to carry a heavy backpack, as there is no water, shopping facilities or accommodation along the Ruta de la Cresteria. Since camping is prohibited, you have no choice but to sleep in the open air. Afterwards, a day trip to the interior of the Caldera de Taburiente is worthwhile.

The Ruta de los Volcanes leads over the crater-strewn ridge of Cumbre Vieja, from the Fuencaliente lighthouse on the southern tip of the island up to the 1945 m high Volcan de la Deseada and on to the Refugio del Pilar in the centre of the island (if you don’t want to walk the Ruta de la Cresteria afterwards, it’s best to do this in the opposite direction, i.e. downwards).

Cumbre Vieja is the active rift zone of a shield volcano. This means that stretching causes fissures to open up where magma can rise. In contrast to a “normal” tectonic rift, where stretching causes a crustal floe to sink, the rift of a volcano develops into a narrow ridge due to the accumulated volcanic rocks. The craters, which have every conceivable shape, are strung along the fissures like pearls on a necklace.

Some of the volcanoes look like classic volcanic cones from certain angles, which is more of a coincidence because the crater is not at the top of the cone but next to it, while the hill is a pile of ejected cinders. Some of these were still so hot when they hit the ground that they were welded together to form a solid rock. In other places, the mass flowed off as a lava flow. Strictly speaking, these mini-volcanoes are countless cinder cones of the Cumbre Vieja volcano, which forms a new eruption centre with each eruption.

Clouds, fog, rain, unfortunately I don’t have such good weather, the colour of the sky fits well to the white of the salt works next to the lighthouse. At the youngest cinder cone, Teneguía, active in 1971, I huddle in a much too small rock niche to wait out a heavy downpour. Nevertheless, I walk to the Fuente de los Roques, where I find a dry corner at a covered barbecue area.

The next morning the weather is a bit better, but while I am sitting on Volcán Martin (active 1646), the clouds are already gathering again and at noon on the highest point, Volcán de la Deseada, I sit in dense fog and imagine from the information board how beautiful it would be to see the blue sea on both sides and Tenerife, La Gomera and El Hierro on the horizon. I take a long strategic break and read a few chapters in a novel. In the late afternoon, the clouds actually break every now and then and I often stop to catch a suitable moment for a photo. Some of the craters in this section were formed in 1949: a lava flow emerged from the elongated Duraznero crater system, and at Hoyo Negro, interaction with groundwater led to violent water vapour explosions that left behind a particularly large crater and deposited entire mounds of finely fragmented ash.

Nearby is Nambroque, which is uncharacteristically a phonolite dome that was active just over 1000 years ago. By now it’s early evening and the clouds have lowered a bit, so I’m in the sun and even take off my fleece jacket. After I’ve had my fill of craters, I dive down through the cloud cover to the Refugio del Pilar (to camp here you have to get permission beforehand).

At sunrise I sit on the neighbouring volcano Birigoyo, the northernmost cinder cone of Cumbre Vieja, and have an almost cloudless view to the north, of the narrow, low ridge Cumbre Nueva, to the left of it the wide basin with the village of Los Llanos, behind it the volcano Bejenado and in the back the Caldera Taburiente, surrounded by high rock faces, over the rim of which the continuation of the GR 131, the Ruta de la Cresteria, leads. How the spectacular Caldera de Taburiente was formed is best explained from here. It is also an entertaining chapter in the history of geology.

The Spanish word caldera means cauldron. In geology, it usually means a large crater-shaped collapse structure formed after a large magma chamber was emptied during a volcanic eruption and the “roof” of the magma chamber collapsed into the interior. Fine examples are Crater Lake (USA), Lake Atitlan (Guatemala), Quilotoa (Ecuador), the Somma caldera of Vesuvius (Italy) and Santorini (Greece). The collapse caldera typically has a diameter of a few kilometres, but in extreme cases it can reach more than a hundred kilometres, as Lake Toba on Sumatra impressively shows (being the result of repeated eruptions).

The term is derived from the name of the Caldera de Taburiente – although it is not a caldera. The German geologist Leopold von Buch introduced the term in 1825 after visiting the Canary Islands. This was at a time when the dispute between plutonists and neptunists was slowly being settled, i.e. between those who believed in magmatism and those who also considered basalts and granites to be deposits of a sea. As a student of Abraham Gottlob Werner, an avowed Neptunist who taught in Freiberg, von Buch was also a Neptunist for a long time, until he visited the volcanoes in Italy, in the Auvergne and finally the Canary Islands and changed his mind. Von Buch called the Caldera de Taburiente an “uplift crater” and imagined its formation as magma and gases rising from below and pushing the volcano up from within – similar to what actually happens in a caldera (well, not quite). The Scottish geologist Charles Lyell doubted this; for him, the caldera was simply formed by erosion, and in 1855 he introduced the term “erosion caldera” to counter von Buch. At least in the case of the Caldera de Taburiente, Lyell was right.

In fact, erosion was the main factor that gave the Caldera de Taburiente its shape, although the shape was already predetermined by a huge landslide, a so-called flank collapse. We have known that volcanoes are fragile structures since the 1980 eruption of Mount St. Helens (USA), when a good part of the cone slid off, leaving a “crater” with a horseshoe-shaped rim. Something similar happened to La Palma about 560,000 years ago, the top of the volcano slid westwards into the sea, leaving the Los Llanos basin (Cumbre Nueva and the northern rim of Caldera de Taburiente are the horseshoe of this flank collapse). Incidentally, it is quite possible that such a landslide could be repeated on Cumbre Vieja, whose western flank is also relatively unstable. This could even trigger a tsunami that threatens the Atlantic coast of America, but it is unlikely that this scenario will occur in the foreseeable future.

Finally, a new volcano, the Bejenado, grew inside the horseshoe “crater”. Between this volcano and the northern edge of the horseshoe, only a narrow valley remained, in which increased erosion set in, and at the same time backward erosion shifted the rock face backwards: The “erosion caldera” Taburiente was formed. The rocks of the basin act as a trap for clouds, which makes the process even more effective.

To reach the cauldron, I just have to hike along the ridge of Cumbre Nueva, first flat and then climbing more and more steeply, whereby the six litres of water in my backpack make themselves felt (I inevitably ignored the sign “no drinking water” at the Refugio del Pilar). At Punta de los Roques I reach the Caldera de Taburiente, which is sadly again filled to the brim with clouds. Fortunately, the clouds slowly spill up and down, so that as I continue walking I still get glimpses of the witches’ cauldron, of rock towers shrouded in clouds that remind me of the landscapes of Chinese painting.

On one of the peaks on the Caldera rim, the Pico de la Sabina, you can see petroglyphs engraved in the rock by the Guanches – behind a massive steel fence, because a few idiots absolutely had to carve their names next to it. The Guanches were the pastoral people who were living on the island before the Spanish arrived and who put up amazing resistance to the invading world conquerors in the 15th century.

After a night at Punta de la Cruz, I pass the white domes of the observatory and reach the highest point of the island, Roque de los Muchachos. From here, the long descent begins, more than 2000 metres in altitude, always along the ridge, of which I don’t notice much, however, as I soon disappear in the fog. Once below the clouds, all I can see are settlements and banana plantations wrapped in foil. Finally, I walk through vineyards, past cacti, fincas, orchards, scrap metal, concrete mixers, plantations, until I reach Puerto Tazacorte via a nice stone path that winds down the steep slope to the coast, where a beer is waiting for me in a restaurant. 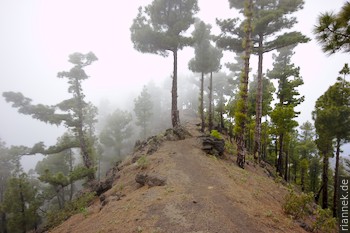 The next day the clouds clear up and since I still haven’t had enough of the caldera, I decide to take a look inside, another geological treat. To do this, I take a taxi to the Los Brecitos viewpoint, just below the rock face, to hike from there through the steep pine forest to the centre of the caldera to the Casas de Taburiente camp and then back out through the Barranco de las Angustias gorge.

I walk through the interior of a seamount that has been raised above sea level (and tilted in the process), so the rocks are actually older than the island of La Palma. Everything below the striking rock face of the caldera is submarine igneous rocks (apart from the masses that have tumbled down from the rock faces, the fragments of which consist of volcanic rocks that have erupted above sea level, and then there are also sediments from a lake that the Bejenado volcano had temporarily dammed …). On the way to the camp, hyaloclastic breccias can be seen, which were formed during eruptions of the seamount volcano when it had already grown to just below sea level and the water pressure no longer acted against the gas pressure. Once in the valley, we are really inside the seamount, the gorge cutting into stuck plutons (the detour to the “Cascada Colores” is disappointing, however, it is simply dam encrusted by rust and sinter).

A little further down the Barranco de las Angustias, I pass hundreds of tilted sills and dykes that intruded into the volcanic edifice. Finally, as I come from the interior of the seamount to its skin, so to speak, beautiful pillow lavas are visible (weakly metamorphic and therefore green).