So much for plans: as the Vietnamese consulate is on holiday for a week, I’m stuck for the time being, or rather I can’t leave for Cambodia until half a week later. So I’m going to take a trip through central Thailand first, because what am I going to do in Bangkok for so long?

Golden Buddhas in magnificent temples, pointed stupas rising like needles into the sky, the Royal Palace. Some buildings remind me so strangely of Norwegian stave churches. 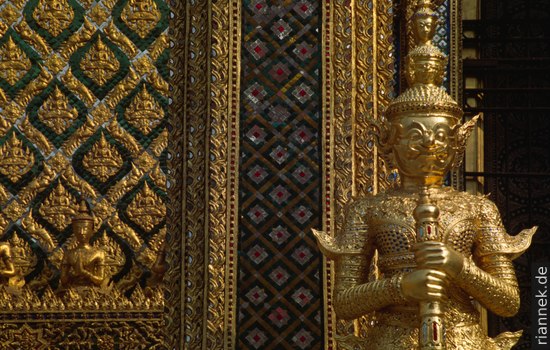 Backpacker life here is concentrated on one street, Khaosan, and the alleys around it. One cheap guesthouse is next to another, with bars, restaurants and souvenir shops in between. Che Guevara and “same same” shirts, sunglasses and fake driving licences are sold on the streets. Others scratch tattoos into travellers’ skin or paint them with henna, dread locks are made or fake hair is braided into their hair. In the side alleys, chicken and seafood sizzle on a small mobile grill, food stalls offer so many different dishes that I can only try a fraction of the different tastes. Sweet, sour, very spicy. Delicious. On a street corner there are posters of people missing since the tsunami and videos are shown… 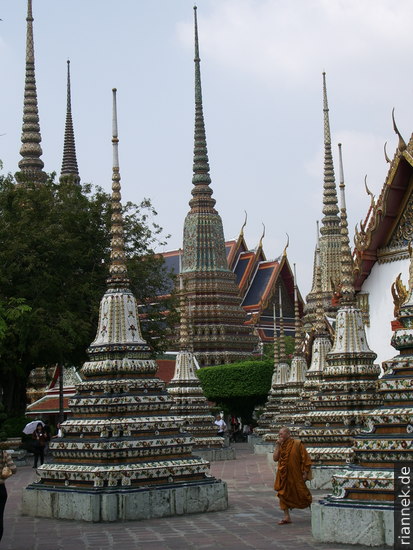 Modern Bangkok is a different world. Highways and the Skytrain wind through the skyline on winding bridges, but again and again small shrines and temples stand like foreign bodies between the skyscrapers and shopping malls, people kneel before a Buddha statue and offer flowers.

In Chinatown, the Chinese New Year is celebrated with a big street festival: food stalls with sometimes suspect delicacies stretch for miles, the streets are decorated with red lanterns and people wear red shirts. The stages offer theatre, pop and folklore, but also martial arts and Thai classical dances, with short but excellent fireworks in between.

“Free a bird”: women can be found again and again, with cute birds in tiny cages. These can be ransomed – and the next bird is caught and put into the cage!