On the volcano with active lava dome (Java, Indonesia)

At sunrise we stand on the huge lava dome of Merapi. The southern half of the dome is enveloped in a cloud of steam and volcanic gases, there is a pungent smell of SO2. Merapi is one of the most active volcanoes in the world and is known to have episodes of dome growth followed by periods of dome collapse. During dome collapse, deadly glowing clouds race down the mountain, but because of the slight asymmetry always well-behaved on the south side, so that the ascent from the north is as good as harmless (cf. my book The Formation of Mountains).

A dome forms in viscous Si-rich (i.e. strongly evolved) lavas when the gas pressure in the magma chamber is not sufficient for the large Plinian eruptions. Explosive, Si rich volcanism is typical of subduction zones. Here in Indonesia, the oceanic crust of the Indian Ocean dips under the Sunda Shelf (Asian plate). 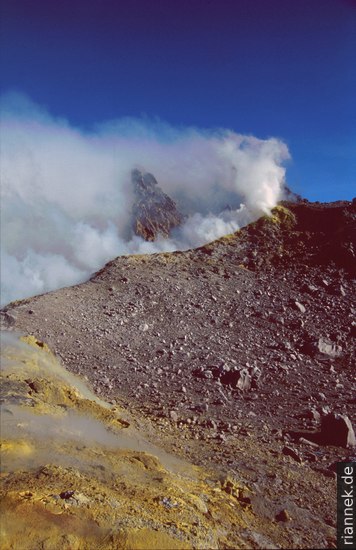 The view of all the volcanoes that stand in the surrounding plains of Central Java is equally fascinating. During the descent, just a few hours after sunrise, the sky begins to cloud over again and soon the mountain is once more shrouded in clouds. It takes three hours to drive back to Yogya, where we fall into bed completely exhausted because of the lack of sleep.