Wild mountain villages in Georgia: Cycling from Mestia to the defence towers in Ushguli and a hike to the Coruldi Ridge with a view of Ushba

Svaneti is a wild, remote mountain region in the Caucasus. Fantastic medieval mountain villages duck under white mountains with summit elevations between four and five thousand metres. Almost every house has a fortified tower, a sight that almost makes the memory of San Gimignano in Tuscany fade. This region has always maintained a certain independence, no matter who ruled the rest of Georgia. Only a few years ago, kidnappings were something of a popular sport here, but now it is considered safe and the tourists are back.

Just getting here was an adventure in itself. First, the night train to Zugdidi. It was so hot on the train that even when I was lying quietly, sweat was pouring out of my pores. I slept accordingly well. Then 5 hours in the minibus on the winding, pothole-strewn road to Mestia. On the way, the driver stopped for breakfast, he bought a round of Khajapuri and put a 2 l bottle of beer on the table. I tried to resist like everyone else, but with me as a German all the arguing didn’t help, so I drank two glasses with him. Better than the driver drinking my share, I thought, but he soon arrived with the second 2 l bottle… We then drove on at a pretty fast pace. I was not only drunk, but very tired. I kept nodding off until the next pothole made me pull up and I looked into the gorge deep below us. I was damn glad when we arrived.

Remote Ushguli is the most picturesque and well-known of Svaneti’s mountain villages. I chose a mountain bike to get here, riding through varied scenery and now and then through even more pretty villages. The road is bad enough never to get boring, the rain of the last few days has softened it into a mud pool in places.

In Ushguli, towers crowd close together against the backdrop of Georgia’s highest mountains. In the evening, the soggy, muddy alleys are full of cows waiting to be milked. I balance from stone to stone and pass some men standing in a circle, alternately drinking wine and singing in several voices. Of course I am invited to join the circle, with a glass in my hand, listening. 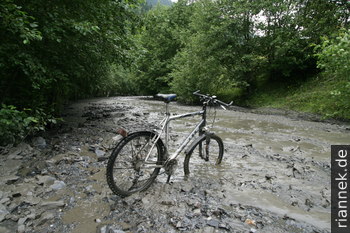 A surprise awaited on the way back at one of the rivers to be crossed. The water was no higher than on the way up, but the lane had disappeared, the river had heaped up walls of shale and dug new ditches. It looked as if no vehicle had ever passed here before. The river was quickly crossed, only stupidly, the road from here down was a disaster: the heavy rain of the previous night had created a muddy stream, a hundred metres of knee-deep mud. I had to put my bike on my shoulder and struggle up the slope to get past. On the other side there were two cars and a few perplexed tourists, no jeep would help…

From Mestia I hike to a worthwhile “small” lookout mountain, after all 1900 metres in altitude. Most of the tourists turn back at a few small lakes, I pick my way from here up the slate rubble to the Coruldi Ridge. The last part is really unpleasant, “drawer climbing” in the steep shale, every grip comes towards me and every step slips out from under me. But the effort is worth it, as soon as I reach the summit cross, a magnificent panorama spreads out before me. Directly in front of me is Ushba, the most inaccessible peak in the Caucasus, below me glacier streams on all sides, on the right one 4000 metre peak next to the other.