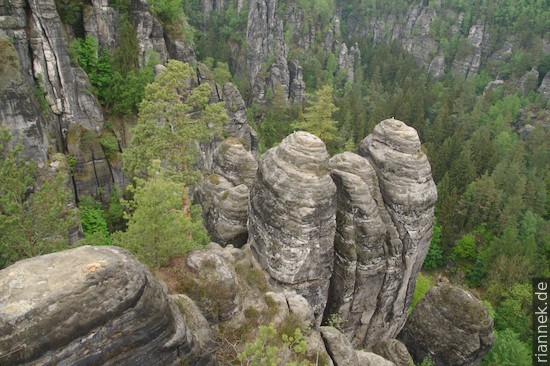 With its abundance of picturesque views, Saxon Switzerland attracted Romantic landscape painters like no other region. On the Malerweg, following in their footsteps across the landscape in a hike lasting several days, I imagined all those Caspar David Friedrichs and Ludwig Richters dragging their easels and canvases along narrow paths. I don’t know much about romantic paintings (with the exception of C. D. Friedrich), but I do know a lot about their landscapes. The Malerweg (Painter’s Path), which makes a wide arc through the whole of Saxon Switzerland with many ups and downs and leaves out only a few vantage points, also shows how diverse this landscape is, consisting not only of sandstone columns but also of gorges where ferns cling to rock faces, densely forested hilltops, table mountains, the loops of the steeply incised Elbe valley and villages between gentle hills with bright yellow dots in the canola fields. Every now and then, the route passes through boring spruce monocultures and sometimes, unfortunately, I had to toddle along a road for a bit.

I omitted the first stage and started in Wehlen instead, which can be reached by S-Bahn. The first destination was the Bastei, a dense collection of stunning views of sandstone columns and the Elbe, though it not necessarily gained by being accessible by car. Squadrons of elderly people pass souvenir stalls and an organ grinder, and at the lookouts I always have to wait a while to get to the railing so I can look down. Already in the 19th century, so many tourists passed by here that the wooden bridge leading from rock to rock was replaced by one made of sandstone. The hustle and bustle doesn’t get any better below at Amselsee (which in fact is a reservoir built in 1934). “Buy a gondola ticket here” is written above a ticket machine, pure nature experience… 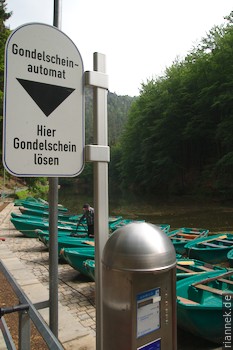 At Hohnstein, the path leads through a steep cleft from a rock down into the valley, and up again on the other side through a small gorge. After that, the trail drags on a bit until you reach the viewpoint Brand. The view here is quite different from usual, you look over rolling hills with fields and villages, in the back on the right a few table mountains that look quite small from here. The path continues through these gentle hills, which are dissected by several valleys, into which the path leads steeply down and up again. 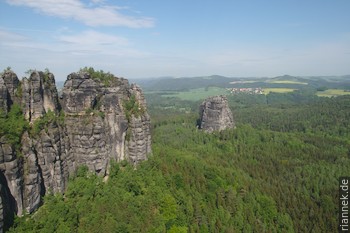 The Schrammsteinaussicht is the next highlight, one of the best views as far as spectacular rock formations are concerned. Over the ridge path and past the Affensteinen, there are more rocks until, at the Lichtenhain waterfall, the 19th century tourism industry can once again be admired. Because there was no spectacular waterfall in the region, they simply built a dam, which is still opened today when the host turns on the waterfall and lets the content of the reservoir splash over the rocks. This is also the terminus of the Kirnitzschtalbahn, a tram that strayed from the city. 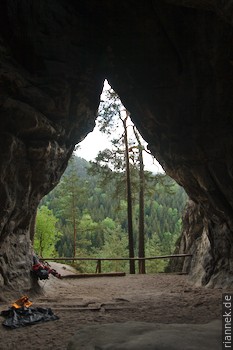 Kuhstall (“cowshed”) is one of the rock gates, a castle once stood on top of it, which I reach via the “ladder to heaven”, a staircase welded into a crevice like an accordion. The Kleinsteinhöhle is another rock gate, strictly speaking a double arch, behind which, a few metres further on, another rock prevents the view from above. Here in the back part of Saxon Switzerland, you can see mainly forested hills, with only a rock peeking out here and there. 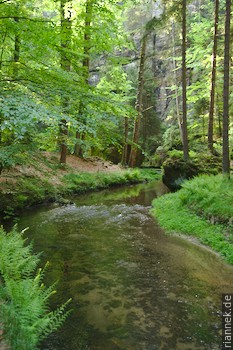 I took a detour through the Kirnitzschklamm, a pretty gorge, even if the name “gorge” is an exaggeration. From the late 16th century onwards, dams were built to create flood waves so that the felled timber could be floated down. The large quantities of wood were burnt by the Saxon court for heating and later also used in the Meissen porcelain manufactory.

Passing another vantage point, I went up the Großer Winterberg and back down to the Elbe. In Schmilka I crossed over the river and climbed up again on the other side.

Below the Kaiserkrone, I stood in front of the boulder on which Caspar David Friedrich’s “Wanderer über dem Wolkenmeer” is standing. There is no view until I reach the top, however, and a sign tells me that the painting is composed of individual motifs from Saxon Switzerland. Presumably the painter also took the clouds out of the sky and put them down into the valley, because in my case they were clearly above me. Quite dark they were, just beginning to obscure the higher mountains.

From here, the path dragged on somewhat monotonously for hours, taking turns and passing through every village that was somehow in the vicinity, until it finally got exciting again at Papststein. The path led me over one table mountain after another, the landscape at my feet in ever-changing perspectives. Some of the summit plateaus of these mountains are very rugged and criss-crossed by small ravines, stunted birch and pine trees seek a foothold in small crevices. At Papststein, the evening sun even came out and chased away the clouds, so that the Barberine, a high (and concrete-patched) rock needle standing a few metres in front of the rock face, was nicely illuminated.

The next day there was no sign of the good weather, it was raining so hard that not even the next hill was visible. Therefore, I did without the last stage to Wehlen, which would have made my hike a nice circle, and got on the train in Königsstein.