Jeep tour (with an annoying group) through spectacular scenery: from Salar de Uyuni (Bolivia) via Laguna Colorada and Laguna Verde to San Pedro de Atacama (Chile) with ascent of the Licancabur volcano.

The landscape in the south of Bolivia is one of the most fantastic you can imagine: the Salar de Uyuni, colourful lakes and lots of active and extinct volcanoes (cf. my book The Formation of Mountains). However, on a jeep tour, in my case with transfer to San Pedro de Atacama in Chile, you can be lucky or unlucky and I was unlucky: I ended up as the only individual in a jeep with Slovenian package tourists including a Slovenian tour guide, who decided on my luck just as he did on that of his flock: “here we have 15 minutes”… Sad to see that everyone takes photos when the guide orders a photo stop, but when I want a stop I read in the looks: “No, you can’t, we are a group and the other jeep is already a few minutes ahead”.

On the first day, we cross the Salar de Uyuni, a white blazing expanse of salt stretching to the horizon. In the middle is an island with huge cacti. 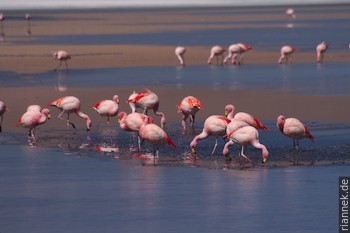 The next day, one lagoon after another, some with a white salt playa on the shore and full of pink flamingos. Now and then, bizarrely eroded ignimbrite rock formations like the often photographed “tree”, and clearly visible fumaroles at Ollague Volcano. And then finally the Laguna Colorada, for me the main reason for the tour: white islands of borax floating on the pink water coloured by plankton. And again a few flamingos.

After 3 minutes on the shore, the guide sends us back to the cars and I still think we are going to another viewpoint, instead we go straight to the hostel a few kilometres away. When I complain, the clown of a guide actually says: “we are a group of 11, and you are alone, so shut up!” After showering him with swear words, I communicate with the group only indirectly through the driver (who couldn’t help it) and sit demonstratively with other tourists for dinner. To save the day, I walk to the lagoon, which takes more than an hour, so that I am too late for sunset.

In the morning, we leave at 5 am for the so-called geyser Sol de la Mañana, in reality a few fumaroles and mud pools and no geyser. Really just a moment before sunrise we drive on again (how idiotic!), to a hot spring. Here I splash around with some nice backpackers while my stupid group stands outside. It’s their own fault. We continue to Laguna Verde, which is only green in the afternoon. Behind it the Licancabur volcano. 3 minutes and back into the car. I get out at the neighbouring Laguna Blanca at around 10am, finally I am rid of the group.

The Licancabur volcano (5920 m) can only be climbed with a guide. However, there is no guide that afternoon and not even petrol to drive to the starting point. “Then go without a guide, no problem…”

For a little more than an hour I walk along the shore of Laguna Blanca to Laguna Verde. The lake is now actually green, with a tinge of turquoise. For better views, I walk another hour around the lake, and around 2 pm I am on the western shore, below the volcano. Damn late, because from the shore it’s 1600 metres of altitude to the summit and the sun sets at just after 6pm! On the ascent I give everything my lungs and legs can give. The higher I get, the more I dig my way up a slippery steep slope of loose material, typical of volcanoes. But I am rewarded with magnificent views of the two lagoons and the volcanic landscape around them.

As time goes by, I have the feeling that they only let me walk without a guide hoping that I would give up (without a jeep), but this thought drives me upwards all the more. On the summit, however, I only arrive in the dark; after all, it only took me 5 hours from the lakeshore! The crater is only a black hole in which a white surface is visible: the ice on the crater lake, the highest lake in the world. In the light of the headlamp, I slowly slide down the mountain, then the long stretch along the lakeshore; thirsty and exhausted I drag myself forward. I arrive around 11 pm, the señora is already in bed, and so I get neither dinner nor anything to drink.

The next morning I take a jeep to the border on my own. For the bus to San Pedro I have to pay another 40 Bolivianos, although the transport was supposed to be included in the tour, but I didn’t have a voucher for it!