Mountaineering in Bolivia: Climbing Illimani (6438 m) in the Cordillera Real 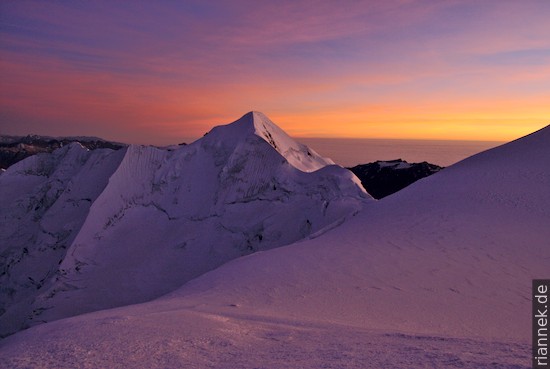 A huge mountain of granite and ice towers over La Paz. The special thing about the Illimani is that it stands alone as a mighty block, away from the rest of the Cordillera Real, also away from the Altiplano, from which it is separated by some valleys (cf. The Formation of Mountains). This is also what makes the approach on dusty tracks so tedious. Slowly we curve from one valley to the next, until finally the backpacks are strapped onto a mule by me and my mountain guide, and we ascend to the base camp.

The next day we hike to the high camp with the help of a porter. It is impressively situated on a rocky ridge, with spectacular glaciers on either side and the various peaks above.

At night we climb up over the glacier. The group that had an hour’s lead is quickly overtaken. I am lucky, the mountain is in good condition this year and unusually easy. There is virtually no bare ice and at the only major crevasse there is already a step in the right place. Then we climb the long, steep, icy slope and a little later, at sunrise, we hike over the almost flat summit ridge, up to the 6438 m summit. Although there is hardly any wind, it is freezing cold, I constantly move my fingers, which are half frozen.

On the descent, we meet the other group on the steep slope. At the high camp we have soup and my guide notes that he has never ascended and descended the summit so quickly. We call La Paz to see if we can be picked up today, but unfortunately that doesn’t work out. So we camp for another night next to the plaza of the village from which we started.