Journey on the Amazon: By boat from Tabatinga (Brazil, border with Colombia) to Manaus 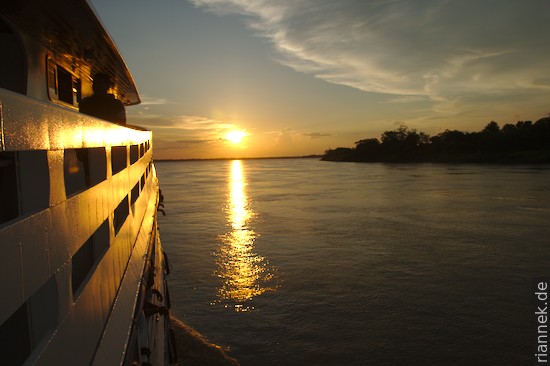 Leticia is a sleepy town in the tri-border area between Colombia, Brazil and Peru, where life moves as slowly as the Amazon flows by. You can walk safely in the middle of the streets, there is so little traffic. From the rest of Colombia, the place can only be reached by plane; most goods reach it by ship from Peru or Brazil.

The Brazilian sister city of Tabatinga is a little more lively, but here too you have the feeling of being far away from the rest of the world. Tabatinga’s port is a muddy slope where small and narrow boats loaded with fish and bananas dock. Sand has been piled up against the mud on the slope above the floating quay for the larger boats to Manaus. 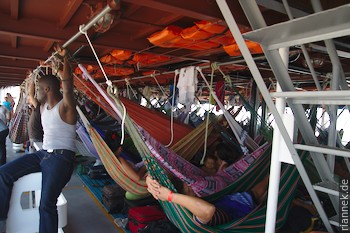 The ship that takes us the 1400 km downstream to Manaus is a small white steamer, its belly filled with cargo. On the tween deck we hang up our hammocks among a hundred others. It is so cramped that everyone starts swinging as soon as someone moves. 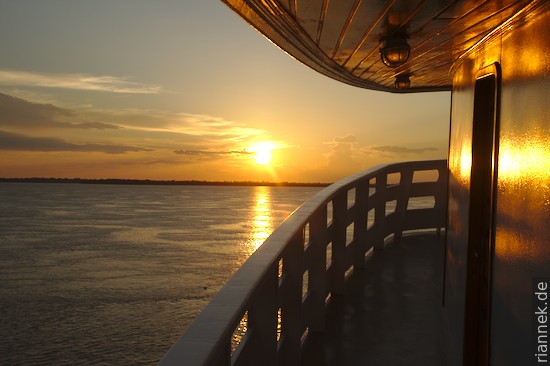 Unless half of the river is hidden behind one of the large islands woven into it, it looks like an endlessly long lake. A wide expanse of light brown water, on the far bank a green fringe, the forest. Trees, trees, trees. Forest, forest, forest. Every few hours a settlement, otherwise nothing but forest and water, for three days and three nights. 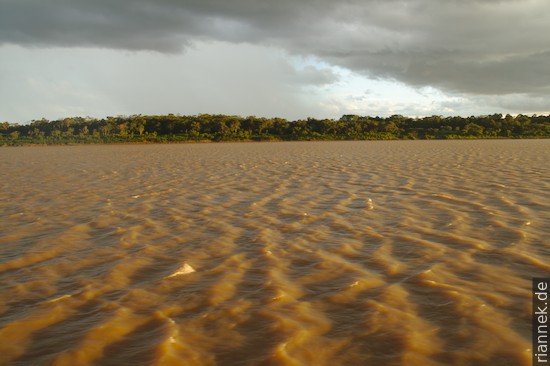 Unfortunately, the ship belongs to a Protestant shipowner who wants to impose his ethos of renunciation on his passengers. Therefore, there is no beer, the lights are switched off shortly after sunset (18:30) and food is served in the refectory at absurd times: Lunch at 10:15, for example. 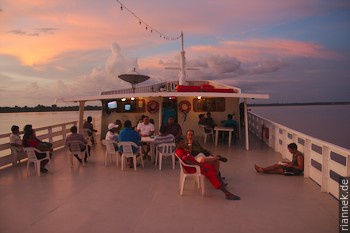 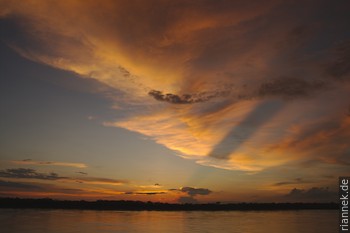 The last few hours before we reach Manaus, settlements can be seen more and more frequently on the banks. Then we reach Encontro das Águas, the confluence of Rio Solimões (the upper part of the Amazon) and Rio Negro. The two rivers that join here are huge streams in themselves, each 2 to 3 kilometres wide! The most fascinating thing, however, is that the characteristics of the water of both rivers differ so much that they do not mix for several kilometres, but flow side by side separated by a sharp line: on one side the light brown and turbid water of the Amazon (“white water”), full of suspended matter from the erosion of the Andes, on the other side the dark, clear water of the Rio Negro, rich in humic acids (“black water”).

Finally, we went up the Rio Negro for half an hour to Manaus. The city became so rich at the end of the 19th century due to the rubber boom that it had an opera built, among other things, where we see a French-Moroccan film as part of a film festival… We cross the Rio Negro over the huge bridge, which was inaugurated only two weeks ago, and drive about 200 km upstream to Novo Airão on the other side. Here, the Rio Negro is fanned out into many river branches separated by long islands, the islands in turn full of lakes of all sizes. At a jetty, pink river dolphins are fed as a tourist attraction. A boat takes us to a small lagoon on one of the islands and to a sandbank for a swim. In the sand we find the imprint of a ray. It is not only amazing that there are rays in this river (and shrimps, for example), but also that their closest relatives live in the Pacific: before Gondwana broke apart, the Ancestral Amazonas was still flowing in the opposite direction, only after the rise of the Andes did it change direction.

Along the road we see plantations, fenced meadows and freshly cleared areas, holiday homes by small pools and fincas. Such ever-widening aisles, cutting criss-cross through the jungle, are becoming more and more numerous at breakneck speed.

On the way back to Manaus, we make a detour to the village of Paricatuba. Here there is a dilapidated building from the 19th century, which last served as a leprosarium. Lepers lived here in isolation from the rest of the world until 1962. Today, the roofs have collapsed, lush tropical greenery grows in the rooms and trees even grow on the walls, their long roots covering the walls. The sight reminds me of the overgrown temples at Angkor Wat.