Trekking around the Mont Blanc massif: the Tour du Mont Blanc (TMB) is justifiably one of the best-known treks in the Alps.

Hiking all around the Mont Blanc massif: The Tour du Mont Blanc (TMB) is rightly one of the most famous trekking routes in the Alps. It goes in 10 days through three countries around several 4000-metre peaks, with around 10000 metres in altitude over a distance of 170 km. In short, it alternates high-altitude trails with extremely spectacular views and relatively boring stages.

I chose Col de la Forclaz (bus from Martigny) as the starting point. One pass further on, the most beautiful section begins with the first views of the Aiguille Verte, Mont Blanc and the Chamonix valley. Over a mountain ridge, the route descends into the valley and then, on the side of the Aiguilles Rouges, immediately ascends again to the wonderful Lac Blanc. On this day I had more than 30 °C in the shade, a sharp contrast to the autumnal summer I had in Berlin before.

The next morning it rained and there was no sign of the mountain giants opposite. So I decided to wait a day. In the afternoon it got better and I made a detour to the Aiguille Crochues. From here, it is nice to see that at the neighbouring Aiguille du Belvédère, sediments still lie on the basement rocks of the Aiguilles Rouges massif (cf. my book The Formation of Mountains).

The next day, in good weather, I enjoyed the view of the jagged granite peaks opposite, through which the huge valley glacier Mer du Glace winds. I hiked with great views (and together with many day-trippers) via Flégère, Planpraz, Col du Brévent and le Brévent to Refuge de Bel Lachat.

A day later I went down to les Houches and then cheated and took the cable car to Bellevue. Now came the most boring part of the hike, down into the valley and all the way along the ski resort of Contamines. It’s crazy: there’s a loudspeaker on every streetlamp, playing department stores’ music. So I hurry up the valley as far as possible! At Col des Fours I can finally see Mont Blanc again.

One pass further on, at the Col de la Seigne, things get spectacular again: rock pyramids of limestone and granite tower above the Val Veny, a few small turquoise lakes are hidden in the moraine of the Glacier du Miage, and above it all, Mont Blanc.

After looking over the moraine of the Glacier du Miage, which is covered with rock debris, I hike upwards along a trail on the opposite side of the valley.

Soon the path winds down to Courmayeur in the Aosta Valley and up again on the other side. There, the view goes across the Val Ferret to the Grandes Jorasses and back to Mont Blanc.

Over a pass, I return to Switzerland in the valley also called Val Ferret. The long section to Champex is more of a nice walk, without great views. On the last stretch to the Col de la Forclaz, there are still nice views of the Rhone valley and the Dents de Morcles, the destination of my next hike. 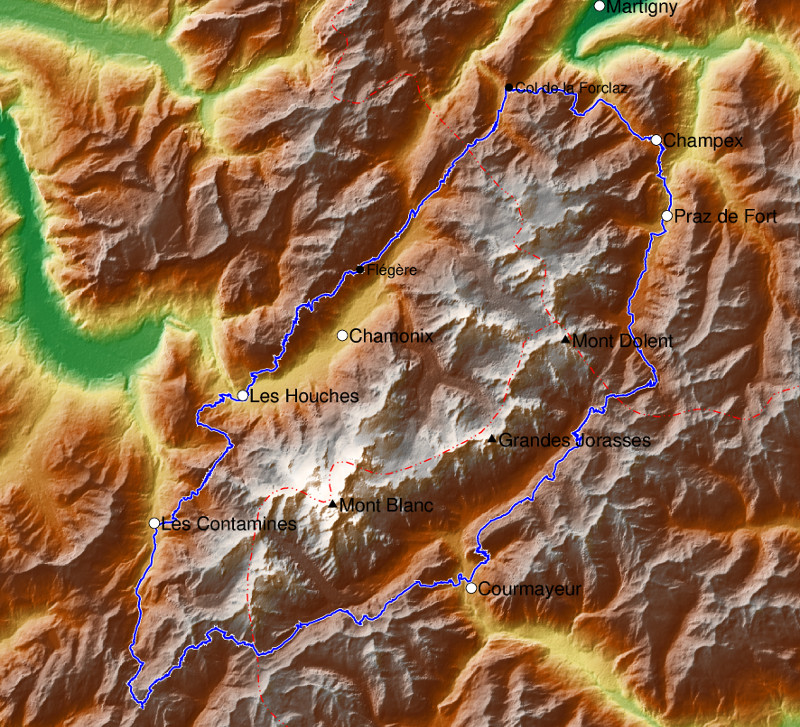 The Formation of Mountains
Folds of the Morcles nappe
Dolomites High Route n. 9
Traversing Corsica on the GR20
Trekking and Photography
Trekking map with PyGMT and Python