Two-week long-distance trek across the Dolomites

The Dolomite High Routes are ten long-distance trails, all of which cross the entire Dolomites in just under 2 weeks along a ridge from mountain to mountain. They are certainly among the most beautiful treks in the Alps. Most frequented is trail number 1, the classic route. Instead, I choose number 9, the only trail that crosses the Dolomites not from north to south, but from west to east.

A good choice, the path is really beautiful throughout. Sometimes it is a scenic walk, at other times you have to hold on tight, with a constant change of impressive views. Not a single stage is boring.

The trail leads through the best-known parts of the Dolomites and is therefore especially nice for hikers who want to get to know the Dolomites. On the other hand, if you’ve already been to the region and checked out the via ferratas, for example, you already know most of it and should rather choose a more remote route. I was in the area as a child and it was exciting to compare my few memories with reality. Geologically, the trail is also quite nice, as you walk from the older to the younger units, so to speak (see The Formation of Mountains).

In any case, you should take a via ferrata set with you. The most difficult part of the Dolomite high route is more like “secured hiking” on an exposed shelf than a via ferrata, but you will pass some worthwhile via ferrata routes along the way that you can “take along” as a side trip. In any case, if you do without climbing at all in the Dolomites, you miss out on a lot.

Camping (I had a tent with me) is hardly possible, as long stretches lead through nature reserves. So it’s better to hike from hut to hut, which follow each other at short intervals.

I start my hike right away with a variation: instead of starting in Tiers (a village near Bolzano), I begin by crossing the Rosengarten group (the most beautiful section of the Dolomites High Route n. 8). To do this, I take a bus from Bolzano to the beautiful but not exactly lonely Karersee lake and then the cable car from the village to the Paolina hut. After a short hike to the Rosengarten hut comes the first easy via ferrata, which leads over a pass into the heart of the Rosengarten group. Here the Gartl hut ducks under the impressive Vajolet Towers.

From the next pass I make a detour via the via ferrata to the Kesselkogel, with a great view of the Rosengartenspitze. Then I cross the Grasleitenkessel, surrounded by high rock walls, where I meet the Dolomites High Route n. 9, which starts a little way down the valley.

As soon as you leave the basin and thus the rocky world of the Rosengarten, the landscape changes to gentle green hills on which smaller rocky peaks sit now and then – with a view of the large ones in the background. A footpath leads over to the Sassolungo group, past its southern side to the Sella Pass.

Here I decide on the variant via the Pößnecker via ferrata. Not a good idea with a heavy backpack, not only am I very slow, but I almost get stuck in the chimney. At the top, I cross the Sella plateau to Piz Boè, which sits like a pyramid on the edge of the plateau. Unfortunately, the clouds get darker and darker and I can’t see anything from the summit. The next day I just wait, it rains and hails throughout, until it clears at sunset. The morning after, I storm up the Boè again.

This is followed by a hike across the alpine pastures of Pralongia, which are teeming with excursionists. The guide aptly describes the hills as “uplands”, only in this case rocky peaks are draped all around as a backdrop.

At sunset, I stand on the Lagazuoi Piccolo, a great lookout mountain, and watch the changing light on the peaks flaring up all around.

Then I make a detour via the really beautiful Tomaselli via ferrata to the southern Fanisspitze. The via ferrata is considered rather difficult, but this mainly concerns the key section at the very beginning, which you simply shimmy across on the rope. The rest is beautiful climbing, partly very exposed, but always with very good holds. The wooden ladders, which have been hanging in the wall since World War I, seem bizarre.

This is followed by a hike under the rock faces of the Tofana and then the descent to Cortina d’Ampezzo. Here (halfway) you can replenish your supplies. I cheat my way to the Miètres hut by chairlift, wind my way up to the base of the Cristallo and round it halfway via Passo Tre Croci. Just as the sun is setting, I am standing at the ruined Popena hut above Misurina with a great view.

That’s it for good weather for now. In Misurina, I sit for days in the tent at the campsite, which turns into a network of streams. On the worst day, I just take a walk to a café and, hoping for good news, go to the weather forecast posted at the tourist information office. But the forecast becomes more and more pessimistic, postponing the end of the deluge further and further. On an excursion to Monte Piana, a surreal plateau full of trenches and rusty barbed wire that was heavily fought over during World War I, I even catch a hole in the clouds that provides surprising views.

On the last stages through the Sesto Dolomites I get wet at least once every day and the mountains are often shrouded, but every now and then it clears. First I hike between the towers of the Cadini group to the base of the Tre Cime. From the Paternsattel it is worth making a detour to the Tre Cime hut so that you can also see the mountains from the classic perspective. From there I take the via ferrata through a long tunnel and then up to the Paternkofel. I can just see the Tre Cime disappearing behind a curtain of clouds and it already starts to pour. I want to take shelter in one of the caverns in the saddle, but the descent turns into a veritable waterfall and I also have a slow group ahead of me, so I arrive there really dripping. Later I climb up and down to the Büllejoch, where the sun is already shining again. 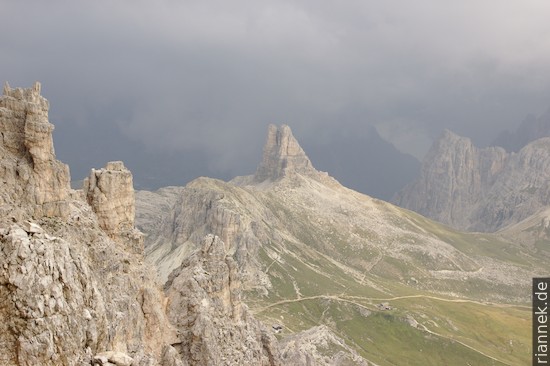 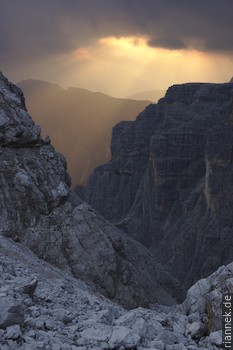 I continue along a path that is visibly less frequented to the Bivacco de Toni, enthroned in a lonely rock world. I don’t yet know that the following stage has been closed for 15 years. From there I scramble along the barely visible path to the Carducci Hut, where I notice the brand-new sign that the path I’m coming from is closed. And the hutkeeper is just strapping the identical sign onto a backpack to put it up at the other side!!

This is followed by a “secured hike” over rocky ledges on the Strada degli Alpini. From the Sentinella Scharte I rattle around the Zandonella via ferrata before descending to the Berti Hut.

Finally, I finish the trek with a solitary hike along the walls of the south-eastern Sesto Dolomites, with the low foothills of the Carnic Alps opposite as a contrast. I reach the destination of Santo Stefano di Cadore for a late lunch. It actually took me exactly 14 days, including the detours and the days I waited for better weather. Now, of all times, the weather is starting to get better, no, really good. Of course I’ll add something else: I’m off to the Brenta.