Cave temple in the basalts of the Deccan Traps (South India) 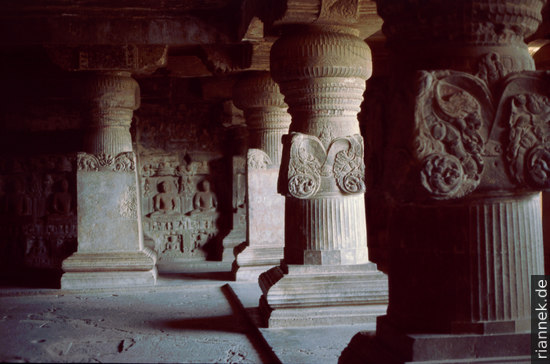 I am in the middle of the flood basalt province of the Deccan Traps, where the landscape now and then reminds me wonderfully of the area of my field work in Tanzania. Especially around the impressive Daulatabad fort, near Aurangabad. In the 14th century, the ruler over northern India decided to move the capital here, so he forced the entire population of Delhi to march here. On the way, people died like flies and after a few years everyone was allowed to go back. India is full of such crazy stories.

The Buddhist monasteries at Ajanta (200 BC to 400 AD, possibly to 600 AD) were carved into the rock in a horseshoe-shaped gorge. The walls have been painted with fascinating frescoes recounting the life of Buddha.

On the way to a view point, I see two snakes almost 2 m long (and about 5 cm thick) lying close together. I couldn’t believe my eyes at first, because they were only about half a metre away from me and were the same colour as the dry grass, with a black zigzag pattern on them. I slowly backed away, no idea how such a snake reacts when disturbed during sex. My guess is python, but the guys nearby said it was poisonous. But they didn’t even know the names of the minerals they sell (apophyllite, not rock crystal!).

The cave temples in Ellora are younger and predominantly Hindu. They are adorned by a pantheon of sculptures.