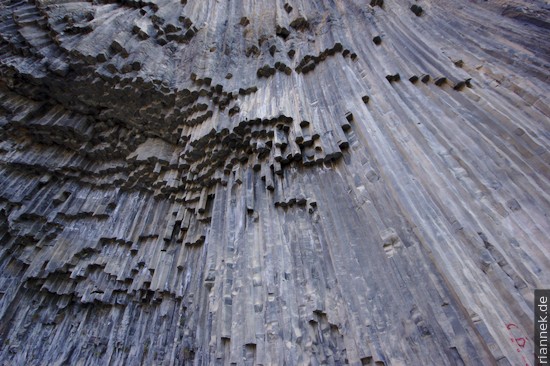 Basalt columns are always fascinating (cf. The Formation of Mountains). The mostly, but not always hexagonal columns are formed by the decrease in volume as the lava cools. This starts at the surface of a lava flow, where heat loss is greatest, with the formation of a network of cracks that continue to open further and further into the interior as cooling continues. 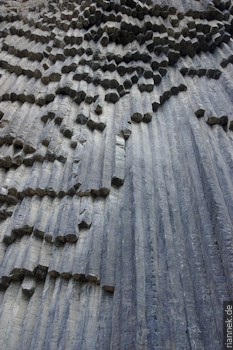 In very large lava flows or lava lakes, the columns are very regular and vertically arranged. In the case of irregular cooling, however, they can also be curved. The most famous is certainly Giant’s Causeway in Northern Ireland, but there are also well known occurrences in Scotland, on La Gomera, in Iceland and in the USA. There are also examples in Central Europe: Eifel, Erzgebirge, Rhön, Bohemia…

Very spectacular, but relatively unknown, are the particularly tall columns in the gorge near Garni in Armenia. After all, they have been nicknamed the “Symphony of Stones”. Garni is a village near Yerevan known for a beautiful ancient temple that stands on the edge of the Azad Canyon. The columns can already be seen from here.

To get to the gorge, walk back into town from the temple and take the first street to the right. Walk straight towards the town hall, where the tourist information is also located. At the town hall, turn left and then take the next street to the right. At the next fork in the road, continue straight ahead, from now on the road descends steeply down a side valley with cobblestones and many potholes. At the bottom of the small river called Goght, the road leads straight ahead to a few fish restaurants. 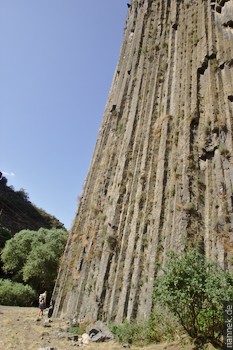 We turn sharp right and reach the first formations a little later. In places, the river has carved scourholes into the rocks, which makes for unusual views from below. The columns hanging overhead are almost reminiscent of organ pipes.

A few bends later, the Garni Temple can be seen high above, then the somewhat larger Azat River comes from the left. It is worthwhile to walk a little further downstream, past picnic areas, fenced gardens, an electricity plant and high-voltage pylons, but also one or two rock formations. If you follow the Azat upstream instead, you have to wade through the river regularly. In return, you will stand under a rock face with even higher pillars.

Yerevan
Tatev and Noravank
Haghpat and Sanahin
The Formation of Mountains