Between Hendaye and Lescun, the HRP leads over green hills and finally through a whimsical karst landscape

From Hendaye (on the Atlantic coast directly on the border between France and Spain) to Lescun, the Pyrenean Haute Route (Haute randonnée pyrénéenne, HPR) leads over lush green hills most of the time. Water points are rare in this section, and you will probably have to fight either the sweaty heat (like me) or disorientation in the fog. Steep slopes are often overgrown with a dense thicket of ferns. Sometimes the path leads through forests with gnarled trees or across grassy plateaus. Often the track follows the border from boundary stone to boundary stone. Again and again I see small bunkers from the war. More peaceful and clearly older are stone circles and dolmens. Lots of horses and sheep roam freely. Only at the very end of this section do I reach real mountains with limestone rocks.

I arrive in Hendaye late in the evening by TGV. At sunrise, I start with a walk to the cliffs at the end of the beach (pass the hospital on the beach, behind it is the access to a car park where the path starts).

Then I jump briefly into the Atlantic Ocean before walking barefoot through the sand to the official starting point. There is a big sign with a map of the GR10, which also starts here and which I follow for the first half of the day today. The HRP is not even mentioned …

Another breakfast in a café, add a baguette to my bagpack and off I go. First I follow an estuary (on the other, Spanish side is the airport of San Sebastian), then I head uphill. I leave the town behind and dive into the green hilly landscape of the Basque country. I have deep blue, cloudless skies. After gentle ups and downs, I climb steeply up Choldokogagna, with a great view back to the coast. On the other side, the much higher La Rhune can be seen, my next destination. However, it is so hot that I drag my backpack from shady spot to shady spot, and from one pass to the next. Then up the mountain on a steep track. The view from the top is so good that there is even a cogwheel train to the summit, but unfortunately the summit has been covered with rather ugly infrastructure. Over steep paths the HRP goes down again. When I finally arrive at the Col de Lizuniaga with tired legs, I pitch my tent on the meadow next to the closed restaurant, where other tents are already standing.

The next morning it is raining, I really didn’t expect that after the cloudless day. After breakfast in the tent, the rain stops, the fog lifts and the weather is as brilliant as yesterday. I hike from one pass to the next, following the Spanish GR11 for a long time. Sometimes it’s through pleasantly cool forests, then again over a ridge with views of the neighbouring hills. Finally, I descend into the valley to the village of Arizkun. After a break with ice cream and soda, I climb up the other side of the valley. I want to use the cool of the evening to walk about half the distance to the next village. At the highest point, the summit of Burga, I have a great view from the tent.

In the morning I set off early. As I cross a clearing, suddenly a shot rings out. Close to me a bird flutters away, then a hunter emerges from the ferns. Probably we both thought, “What an idiot!”

Soon I reach the very pretty village of Aldudes. Luckily I already knew that the village shop is closed on Mondays, otherwise I would have to wait a day now. Now I follow a ridge, gaining more and more altitude. The Redoute de Lindux is my first summit above 1000 m, but that will become quite normal in the next few days. From the Puerta de Ibañeta (Col de Roncevaux), it’s an unpleasant 400 m climb on or near a small road, with a view of the Roncevaux monastery. At the top I meet the Camino de Santiago (this is the highest point of the Camino and also of my day today). In fact, I meet a few pilgrims before I turn off.

Actually, I wanted to bivouac at the Azpegi Cromlechs, a couple of stone circles from the Stone/Bronze Age. However, this is absolutely not a good place to camp, instead of a view there are thistles. And the stone circles are disappointingly tiny, even though I wasn’t expecting anything like at the Orkneys. So I walk a little further to the Col d’Orgambidé, where I arrive in time to see the mountains in the light of the setting sun. The stone circle there is contemporary, though …

The next morning is exhausting and requires some improvisation. First I descend the steep slope to the stream, partly without a path, and then climb steeply up again on the other side. Then I descend through a dry valley. Further down, a stream flows here, which I cross at every bend in the valley, hopping from stone to stone. At the confluence with a small river, I continue straight ahead and struggle up a steep grassy slope. Then I cross the slope below the peaks, and although my progress is rather slow, I overtake an HRP hiker in a trail runner’s outfit. According to the guidebook, there is supposed to be water in the grove next to the pass, but I only find a few horses standing in a mud pool. I have one last sip left for lunch, vultures are circling above me (no kidding, I see them from time to time on the trek).

Soon I reach the Okabe cromlechs. These stone circles are also quite small, but very beautifully situated on a grassy plateau. Now I have to descend into a valley where I can finally get water. I only allow myself a short break, after all I want to reach my next destination in time: the shop near Col Bagargui. I arrive just in time before it closes, and there is everything a hiker’s heart desires. I have dinner in the restaurant before climbing the next ridge. Here I bivouac with a great view of tomorrows summit, Pic d’Orhy. Further away, the higher mountain peaks are visible for the first time. 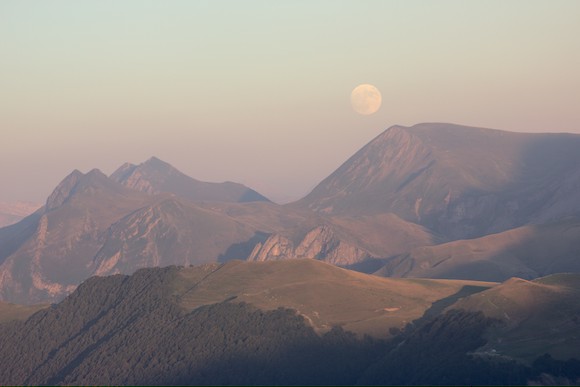 I reach Pic d’Orhy at noon the next day, the first summit above 2000 m. The view in different directions is a strange contrast: to the west, as far as the horizon, the green hills over which I have come; to the east, behind the last few hills, the rocky limestone mountains behind which Lescun lies.

But I still have to walk a little way to get there. I continue over the border ridge, but have to descend briefly near Cabane d’Ardané to fill up with water. I then climb straight back up and bivouac on a pass below Porte de Belhay. Here the landscape is comparable to the foothills of the Alps, with cows on steep grassy slopes and small rocks on pointed mountains. 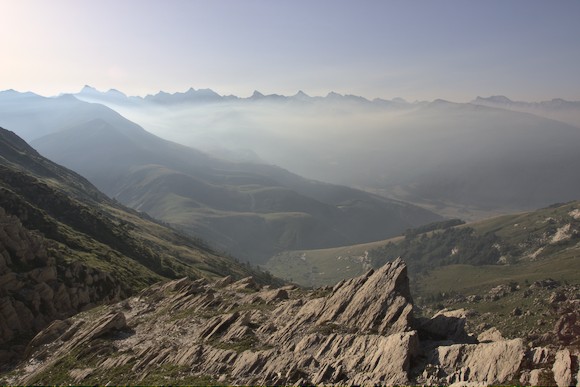 The next day, the landscape becomes much more interesting. From the highest point, still early in the morning, a great panorama opens up with the jagged mountains of Lescun, while the valley in the middle ground lies in a haze. I now hike into this picture, to the lower-lying Refugio de Belagua. For my second breakfast I order torttilla and a café cortado. Then I fill the water bottles, as there is a long stretch without water points. 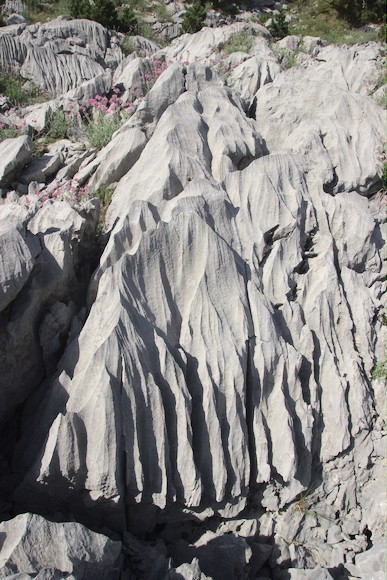 A little later I walk through an interesting karst landscape that reminds me very much of the Velebit. The limestones are furrowed by karren. I walk through a dry valley, the lowest end of which is a depression surrounded by higher terrain. Further up, fewer and fewer pines grow and it looks increasingly alpine. The slopes are bare rock, although they are not very steep. 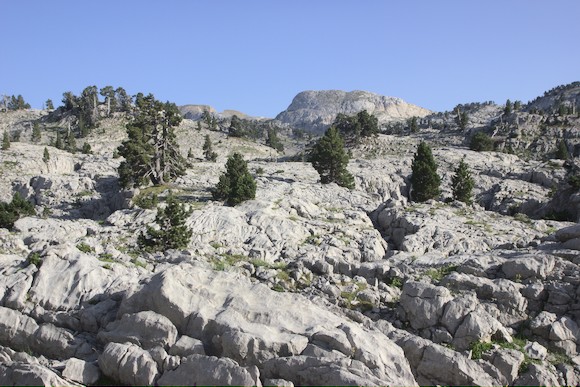 I come to a kind of plateau that consists only of limestone humps and sinkholes. On the other side of the pass, I descend to the Source de Marmitou, a really nice bivouac spot. Surrounded by high rock walls, the water murmurs out of a meadow, right next to a labyrinth of boulders.

Early in the morning I hike down through this high valley. After a steep step, I have a particularly picturesque view back to a waterfall and the small but particularly pointed Pic de la Breque.

Finally, I reach the village of Lescun, very beautifully situated with the mountains in the background. But I set off again straight away after filling my rucksack with food.